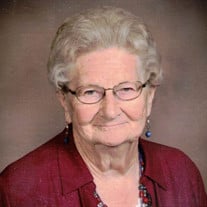 Murlena Lucille Beard, 86, of Imperial, Nebraska was relieved of her pain on January 21st, 2020. On November 15th, 1933, Murlena Beard was born to Wilfred and Helen Miller of Imperial, Nebraska. She was the first born and was later joined by two brothers, Wilfred Jr “Bill” and Delvis. She graduated From Chase County High School in 1951. On August 17, 1952 she married her love, Max Beard. To this union of 58 years, three children were born: Shirly Ann, Albert Lee and Kelly Max. She was blessed with six grandchildren: Cabel Max, Michael, Matthew, Alexandria, Richard and Lyssa and by twelve great- grandchildren: Hunter Max, Raven, Hadleigh, Haleigh, Kylee, Tyler, Colby, Kegan, Clayton, Elizabeth, Sophie and Tucker. Murlena’s extended family includes four step-grandchildren: Natalie, Elizabeth and Jarnetta deJarnette and Aaron Sargent; one step-great-grandchild, Paisley; and one godchild, Mendy Strugeon. Murlena will be remembered as a loving wife, mother, sister, daughter and friend. Family time included traveling to many states to visit her family, friends, and historical sites. She enjoyed Centennial parades and events, football, basketball and volleyball games, graduations and family clean up days and Sunday Night roller skating. She celebrated the 1967 Nebraska Centennial by making the family’s outfits. It was matching yellow dresses for her and Shirly and bright red vests for Albert, Kelly and Max. Her creative efforts won a gold ribbon for “Best Dressed Family” at the Perkins County Fair. Murlena was well-known for her elaborate cake decorating skills while working at the school cafeterias in the Venango and Imperial areas. She even insisted on making her own 50th Wedding Anniversary cake and mints. When she and Max hosted Christmas open house, the farm was full of fun and lights and decorations and homemade goodies were shared with all who visited. After obtaining her CDL, she drove a school bus route. She also drove to many school events throughout the years. She was very active as a volunteer with the Chase County Museum and historical society for many years. She even learned how to run Max’s “Honey Wagon” when his sight failed. Murlena loved her crafts. She gave her love to others through the different styles of blankets and Christmas stockings that she made for loved ones. She enjoyed gardening, her fishpond, puzzles, the sewing club, the birthday club and spending time with her family. Murlena leaves behind many beautiful and fond memories. She will be lovingly remembered. Murlena is survived by her daughter and son-in-law, Shirly and Gene deJarnette of Oklahoma City, OK; son, Albert Beard of Venango, and son and daughter-in-law, Kelly and Lori Beard of Imperial. Grandchildren; Michael and Trinity Beard of Paxton, Nebraska; Matthew and Lacey Beard of Grand Island, Nebraska; Alexandria Beard and fiancé, Blaine of Ovid, CO; Richard and Jordan Beard, of Imperial and Lyssa and Quennton McCombs of Colby, KS. Great-grandchildren include Hunter and Raven Irons of Fort Cobb, OK; Hadleigh and Haleigh Beard of Paxton, NE; Kylee, Tyler and Colby Beard of Grand Island, NE; Kegan, Clayton and Elizabeth Beard of Ovid, CO; Sophie and Tucker Beard of Imperial, NE. Step- grandchildren: Natalie, Elizabeth and Jarnetta deJarnette of Oklahoma City, Okla. and Aaron and Sarah Sargent of Montgomery, WV. Step-great-grandchild; Paisley Sargent of Montgomery, WV; Godchild: Mendy Strugeon of CA. Brothers Wilfred Jr “Bill” and Susan Miller of Sierra Vista, AZ and Delvis Miller and friend, Barb, of Norton, KS., as well as many nieces, nephews, neighbors and friends and special friend, Melda Musick. Murlena was preceded in death by her husband, Max; her first grandson, Cabel Max Irons and her parents, Wilfred and Helen Miller. Pallbearers are Jim Olson, John Dolezal, Don Kelley, Perry Vetter, Larry Green and Casey Francis. Services are being held 10:30 A.M. (MT), Friday, January 31, 2020 at the Imperial Berean Church in Imperial, NE with Pastor Matt Maxwell officiating. Interment will follow services at Mount Hope Cemetery in Imperial, NE. Visitation will be held Thursday afternoon, January 30, 2019 from 2:00-6:00 P.M. (MT) at the funeral home in Imperial. A memorial in Murlena’s name has been set up for the Chase County Museum in Champion, NE. Online condolences may be left at liewerfuneralhome.com LIEWER FUNERAL HOME IS ENTRUSTED WITH ARRANGEMENTS

Murlena Lucille Beard, 86, of Imperial, Nebraska was relieved of her pain on January 21st, 2020. On November 15th, 1933, Murlena Beard was born to Wilfred and Helen Miller of Imperial, Nebraska. She was the first born and was later joined... View Obituary & Service Information

The family of Murlena Lucille Beard created this Life Tributes page to make it easy to share your memories.