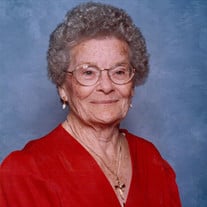 Mildred Elizabeth (Zuege) Stute was born October 11, 1920 in Cheyenne County, Kansas to William and Alberta (Conklin) Zuege. She was the oldest of 7 children: Herman, Maxine, Kathleen, Lloyd, Calvin, and Allen. She was baptized and confirmed at the Immanuel Lutheran Church in Cheyenne County, Kansas. She attended the one room Pleasant Hill School District West 10 School where she graduated 8th grade. Mildred then worked on her parent’s farm for a few years before taking a job in Gunnison, Colorado doing housework for a family. She moved back home and began working at the chicken hatchery near Doan, Nebraska. Mildred met the love of her life or as she would say, “my one slice of the pie” Orval Stute of Haigler. They were united in marriage on October 25, 1941. To this union, four children were born: Kenneth, Linda, LeRoy, and Ray. She worked side by side with Orval operating a farm/ranch and small dairy northeast of Haigler. They raised Herford cattle, Yorkshire hogs, and Holstein milk cows. They fed the separated milk to the feeder pigs and sold the cream to Odenbach’s Creamery in Haigler. She also raised and butchered 200 fryer chickens each year. Mildred and Orval’s farm was a second home in the summers to all of their nieces, nephews, and grandchildren. Mildred was an active member of the Ladies Auxiliary, local quilting club, and Haigler Zion Lutheran Church. She was known for her chocolate cake with burnt coconut frosting and embroidered tea towels and pillow cases. She gave the tea towels and pillow cases as gifts or sold them at the Fall Craft Fairs. She made the coffee and cut the pies at the Windmill Angus bull sales. She read the prayer at the Haigler Memorial Day graveside services. She was a pen pal for the Haigler and Benkelman Elementary 3rd grade classes. She served her community proudly in many ways. After losing her beloved husband, Orval in April 1985, she continued to farm and ranch alongside her son, Ray. There is nothing Mildred loved more than working and spending time on the farm. She spent some time traveling with friends on bus tours. She enjoyed going to her granddaughters, Paige and Sarah’s school and athletic events from Kindergarten all the way to their senior years of high school. Her “girls” were the light of her last 25 years. Due to declining health, Mildred moved to the Assisted Living at Sarah Ann Hester Memorial Home in August 2011. She departed this life May 11, 2016 at the age of 95. She is proceeded in death by her parents, William and Alberta, husband, Orval, infant daughter, Linda, brothers, Herman and Lloyd, and sister, Maxine. She is survived by her three sons and their families, brother Calvin and family, brother Allen and family, and sister Kathleen and family. Funeral services will be 10:00 A.M. (Mountain Time); Tuesday, May 17, 2016 at the Zion Lutheran Church of Haigler with Pastor Chris Farmer officiating. Interment will follow at the Benkelman Cemetery in Benkelman, Nebraska. Visitation will be at the church in Haigler; prior to services the same day as services. A Memorial has been established to the Zion Lutheran Church of Haigler. Online condolences can be left at liewerfuneralhome.com BENKELMAN MEMORIAL CHAPEL IS ENTRUSTED WITH ARRANGEMENTS

Mildred Elizabeth (Zuege) Stute was born October 11, 1920 in Cheyenne County, Kansas to William and Alberta (Conklin) Zuege. She was the oldest of 7 children: Herman, Maxine, Kathleen, Lloyd, Calvin, and Allen. She was baptized and confirmed... View Obituary & Service Information

The family of Mildred Elizabeth Stute created this Life Tributes page to make it easy to share your memories.