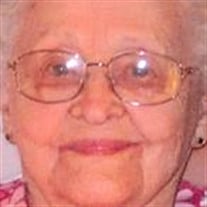 MILDRED MYERS Mildred Marie Rann, Rucker, Myers was born in a sod house in western Hayes County, Nebraska, on July 25, 1920, to Power E. and Hannah B. (Vavra), Rann. She graduated from Hayes County High School in 1938 and married Charles Vernon Rucker, June 24th, 1939, in North Platte, Nebraska. Vernon passed away January 17, 1995, and Mildred lived alone until January 5, 2002, when she married Arvene Myers in McCook, Nebraska. Arvene passed away November 23, 2013, and Mildred then lived the last several years of her life at the Imperial Manor. Mildred resided in many locations over the years including on several farms, in the Nebraska communities of Hayes Center, McCook, and Bartley, the Colorado communities of Longmont and Holyoke, the Kansas communities of Oberlin and Atwood. Family was the most important thing in her life. She was a terrific homemaker, seamstress, and cook and usually tended a large garden. Mildred was also employed outside the home, teaching school and working for the ASCS offices in many locations. She also assisted her father in the Hayes County Treasurer’s office. Mildred passed away Tuesday February 20th, 2018, at the Imperial Manor Nursing Home in Imperial, Nebraska. She was 97 years of age. She is survived by her children; Carol Schuman of Imperial, NE, Jerald Rucker (Janet) of Arvada, Co., Connie Ward (Gary) of Sun City, AZ, 11 grandchildren, 22 great-grandchildren 10 great-great-grandchildren, by Step-Daughter-In-Law: Jolene Myers, Step-Son; Steven and Billy Stanton-Myers, by Step-Daughter; Cheryl and husband, Gerald Beckenhauer, by 5 step-grandchildren and 13 step-great-grandchildren. Mildred was preceded in death by her parents, her sisters; Delores Schuman and Husband Carl Schuman, Elaine Hansen and husband Frank Hanson, by her Sisters-In-Law; Doreen (Rucker) Hoschauer and husband, Lewis Hoschauer and Lavonne (Rucker) Allen and husband, Bob Allen, by her Son-In-Law; Delmer Schuman, by Great-Granddaughter; Tailor Marie Wallin, Step-Son; Richard Myers and by Step-grandson, Jeffery Myers Mildred was devoted to the lord and was baptized into Christ. She was a member of the Christian Church of McCook, Nebraska. The last few years she attended services at the imperial manor and when possible the Westside Church of Christ with her daughter Carol Schuman She will be dearly missed by all who knew her. Funeral Services were held Saturday morning, February 24, 2018, 10:30 A.M. (MT) at the Westside Church of Christ in Imperial, with Jerry Beckenhauer and Bill Bryan officiating. Interment followed at the Hayes Center Cemetery, Hayes Center, Nebraska. Visitation was held prior to services the same day as services, beginning at 9:30 A.M. (MT) Online condolences may be left at liewerfuneralhome.com LIEWER FUNERAL HOME ENTRUSTED WITH ARRAMNEMENTS

The family of Mildred Marie Myers created this Life Tributes page to make it easy to share your memories.