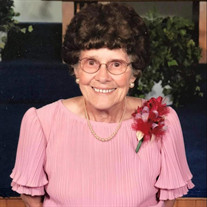 Gelene Brady, 92, entered the gates of Heaven on Thursday, July 15th, 2021, at Imperial Manor in Imperial, Nebraska. Two of her grandchildren were with her as she gained her wings. Mickie Gelene Brady was born on November 27th, 1928, in Lamar, Nebraska, an only child to Elizabeth and David Michael North. Gelene started school in 1934 in Lamar, Nebraska. She skipped the 6th grade and graduated the 8th grade in 1942. She attended Chase County High School in Imperial, Nebraska, and graduated in 1946. On June 5, 1947, Gelene married Maurice Lee (Bunny) Brady in St. Francis, Kansas. Gelene and Bunny had five children: Nancy Lee, Michael Scott, Robert (Bob), Beverly Ann, and Patrick Lynn. Gelene spent most of her years as a homemaker. She loved raising her children. They were always well dressed with their natural curls neatly tended to. She taught herself how to sew at a young age and was a sewing perfectionist. She made clothes, quilts, blankets and many, many dolls—specifically Raggedy Ann and Andy (each with a heart that said I LOVE YOU), to which she gifted each grandchild and great-grandchild. Each item she made had a special tag inscribed with “handmade by Gelene” or “handmade by Grandma”. Gelene also was a wonderful baker. Her cinnamon swirl toast, among many other baked goods, was a favorite of her grandchildren and the familiar smell will always be a wonderful memory, held deep in the hearts of her loved ones. Gelene, like her mother, was an avid letter writer. She spent a great amount of time writing letters to her children, grandchildren, and even some great-grandchildren. She was known for her perfect and most beautiful handwriting, to which she passed down a couple generations. Gelene also loved the game of SCRABBLE. She played almost non-stop when her son, Bob, visited her. Her grandson, Adam and his family, also have wonderful memories of playing with Grandma. And, Grandma always won! She was a wordsmith of the game and could often make multiple words at one time. She also loved to attend BINGO and was a regular player until the game shut down and she no longer had a location to visit. For many years, Gelene was an active member of the Lions Club and received the Melvin Jones Fellow Award (a national award) for dedicated humanitarian services. Over the decades, Gelene’s smiling face could be seen working at many of the new businesses that came to the city of Imperial. One of those most recent jobs included working at the Quik Stop. Gelene was always a friendly face and enjoyed her customers, many of which were also friends. She loved helping out and staying active in the community. Gelene was preceded in death by her parents; husband, Bunny; sons, Patrick and Michael, and daughter, Nancy. Survivors include her son, Bob Brady; daughter, Beverly Brady; numerous grandchildren and great grandchildren and even a great-great grandchild, all of whom loved her dearly.

Gelene Brady, 92, entered the gates of Heaven on Thursday, July 15th, 2021, at Imperial Manor in Imperial, Nebraska. Two of her grandchildren were with her as she gained her wings. Mickie Gelene Brady was born on November 27th, 1928, in Lamar,... View Obituary & Service Information

The family of Mickie "Gelene" Brady created this Life Tributes page to make it easy to share your memories.

Gelene Brady, 92, entered the gates of Heaven on Thursday, July...