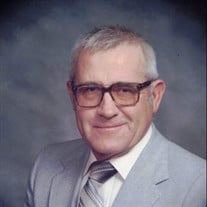 Max was into life full time and for the long run. He was born September 29, 1927, to Isabel (Bennison) and Max Hoffmeister at Imperial, NE, the oldest of three, growing up with sisters Mary (Hillberry) and Ruth (Piva). He attended grade and high school in Imperial, graduating from Chase County High School in 1946. While in high school, he was active in many school activities as well as football and basketball. He joined the service in 1946, taking basic training at Fort Leonard Wood, Missouri. He served in the U.S. Army Ordinance Corps, rising to the rank of Tech Fourth Class (E4) in 2 years. He was a soldier in the American Occupational Forces in Japan. The boat that he was on to take home from San Francisco to Japan had to turn back before they left the harbor because it was taking on water, twice. While underway, he noticed there were very few lifeboats for a lot of people. He never cared to go out on the water after that. His troop transport ship docked at Honolulu Harbor, but he did not get to go ashore other than standing guard at the gangplank. His boat stopped at Okinawa and the soldiers on board had to march around the island. It kept them out of mischief. While marching, he saw no standing tree or structure that was not destroyed. Upon arriving in occupied Japan, he was transported through Hiroshima, which he described as a wasteland, and looked just like the films. He served at Nagasaki, the second bomb site. While in Japan he was in a motor pool, often handling the paperwork. Whoever needed to check out a vehicle usually was judged by need by what was on their shoulder or the top or on the side. He once helped unload a supply boat in Incheon Harbor. He never understood how America landed there in the night in the Korean War a few years later. In the service he acquired a lot of mechanical training. His trust in mechanical war was gauged by this often said phrase “expect a 50% failure rate at the point of attack”. He never complained about taxes after serving, seeing how taxes helped improve bad situations. He hated the devastation that was visited upon the country of Japan, experiencing great empathy for their people. One of the stories he told his children was that he could get his boots polished for the metal pop bottle caps, and that the Japanese people worked hard for very little. After serving he was active in Veterans of Foreign Wars and the American Legion. Max became engaged to Gladys Bussell at the Western Stock Show in Denver on his way home from Japan. They married August 17, 1948, at the Methodist Church in Imperial. Max managed the family registered purebred Angus herd, one of the oldest herds in Nebraska, lasting over 97 consecutive years, first founded by his grandfather Dr. Fred Hoffmeister. He and his father showed cattle many years at the Western Stock Show and took state champion bull at Ak-Sar-Ben. He was instrumental in creating the Southwestern Nebraska Angus Association, which helped the smaller ranchers to have a way to sell their animals. He was that association’s president and sales manager for more than 25 years. He also was sales manager for several other Registered Angus Association sanctioned sales. He and Gladys attended the National Angus Association in Chicago where he was a voting delegate for Nebraska in 1962. At the Chase County Fair, he was active in supporting the Angus breed and helping with overall cattle husbandry. Max was active in many civic activities. He was in Jaycees, a community improvement organization, and was elected to president in 1960. From that he became active in Boy Scouts of America for over 20 years helping many young men in that organization. He was active planning meetings, camping trips, outings, and other activities, helping those boys to become better citizens. While doing these activities, he took classes to continue to improve himself to better serve the community. He also served on the Methodist Board and Imperial School Board. No one would question that he wasn’t a true Democrat. He always let them know. Max was a great caretaker of animals and the land. He appreciated what God gave us. He helped people who needed help, often kids with their calves during showings. He believed in giving people second chances. He worked hard to help the animals under his care. He had a blind calf, Pet, that he guided by placing his hand on the backbone above the hips. He was a good steward to his land, following practices that preserved and improved the land that he owned. He lived by the Boy Scout motto of always leaving a place better than you found it. Max passed away Friday afternoon, November 13, 2020, at the Wauneta Care and Therapy Center. He was 93 years of age. Max was predeceased by his parents, Max and Isabel (Bennison) Hoffmeister and father and mother-in-law Henry Milton and Lorena (Harmon) Bussell, sisters and brothers-in-law: Mary (Hoffmeister) and Al Hillberry and Ruth (Hoffmeister) and Louis Piva. His brothers-in-law and wife, by marriage to Gladys: Calvin Bussell and Olan and Lois (Beard) Bussell. Max is survived by Gladys (Bussell) Hoffmeister, his wife of 72 years, his daughters: Bonita Hoffmeister of Atlanta, Georgia, and LaDene Culver and her husband Ron of Laramie, Wyoming; his sons: Frederick (Fred) Hoffmeister and his significant other Mary Ann Eaglin of Imperial, and Andrew (Andy) Hoffmeister and his wife Nancy Freburg of Kearney, Nebraska. He is also survived by eight granddaughters and eight great-grandchildren. In all respects he was a good man, a loving husband, and a great father. No visitation, Max’s wishes were for cremation. Memorials have been suggested to the Imperial VFW( Flag Fund) , The United Methodist Church of Imperial, or Wauneta Care Center and Therapy Center . Services are pending at this time.

Max was into life full time and for the long run. He was born September 29, 1927, to Isabel (Bennison) and Max Hoffmeister at Imperial, NE, the oldest of three, growing up with sisters Mary (Hillberry) and Ruth (Piva). He attended grade and... View Obituary & Service Information

The family of Max Hoffmeister created this Life Tributes page to make it easy to share your memories.

Max was into life full time and for the long run. He was born...