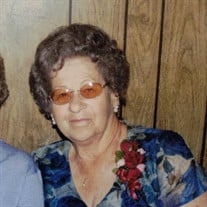 Mary Ann Downing-Schwerdt was the third daughter born to Joseph Anton and Marie Anna (Podskubka) Vachuta on the family farm in Rawlins County, Kansas in June 5, 1929. She attended the Lone Tree District School ¾ of a mile south of their farm from 1934 to 1942. She attended McDonald Rural High School in the fall of 1942 and graduated with the class of 1946. Mary was united in marriage to Kermit Willis Downing in Bird City, Kansas at the Methodist Parsonage on December 25, 1947. The couple lived for one winter southeast of where Kermit was raised in Rawlins County, Kansas. After that year, they moved closer to where Mary was born and raised and made a home in northern Rawlins County, near the Kansas-Nebraska border and 1 mile southeast of her childhood home. Mary and Kermit were blessed with 4 children: Cheryl, Douglas, Greg and Jeanette. Mary kept busy with her family as well as helping Kermit and her parents on the farm. She made most of the clothes for her young children and always kept a big garden with strawberries, radishes, peas, string beans, spinach carrots, cucumbers and beets. After 27 years of marriage, Kermit passed away from cancer in 1974. Mary married Donald Charles Schwerdt in Stratton on December 3, 1977. She and Don shared 25 years together as husband and wife until his passing on May 19, 2003. Mary was a member of St. Joseph’s Catholic Church in Stratton and was active in the Altar Society. She enjoyed working with flowers, embroidery, baking, cooking and candy making (especially around the holidays). Her specialties were kolaches, cinnamon rolls, noodles and mints for family weddings and special occasions. No one ever left Mary’s home hungry! She also enjoyed corresponding with people and for 20 years had pen pals from Pennsylvania and Ohio. Mary took time to send friends and family handwritten cards and letters to mark the little and big occasions in their lives. Mary moved to the Hester home in December of 2010. Mary passed away peacefully with her children beside her on January 13th, 2019 at the Sarah Ann Hester Memorial Home. She was 89 years of age. She was preceded in death by her parents, husbands: Kermit Downing and Donald Schwerdt; daughter, Cheryl Wilkens; son, Greg Downing; granddaughter, Alicia Burkhalter-Rippe; sister, Alice Vrbas and step-son, Kerry Schwerdt. Survivors include: Son, Doug Downing and wife, Margaret of McCook, Nebraska Daughter, Jeanette Burkhalter and husband, Kevin of Bird City, Kansas Son-in-law, Larry Wilkens of Merida, Mexico Daughter-in-law, Geraldine Downing of Kearney, Nebraska Step-son, Michael Beck of Mesa, Arizona Step-daughter, Marsha Martinez and husband, Eugene of Denver, Colorado Step-daughter-in-law, Janne Schwerdt of Wheat Ridge, Colorado Sister, Julia Diehl of Stratton, Nebraska 9 grandchildren & 29 great-grandchildren Visitation will be held Thursday afternoon, January 17th, 2019 from 2:00-6:00 P.M. (CT) at St. Joseph Catholic Church in Stratton, Nebraska. A Rosary will be recited Thursday evening, January 17th, 2019; 6:30 P.M.(CT) at St. Joseph Catholic Church in Stratton with Father Matthew Eickhoff leading. Mass of Christian Burial will be Friday morning, January 18th, 2019; 10:30 A.M. (CT) at St. Joseph Catholic Church in Stratton with Father Matthew Eickhoff celebrating. Interment will follow services in Rose Hill Cemetery, Stratton. Memorials have been established to St Joseph Catholic Church in Stratton and the Sarah Ann Hester Home in Benkelman. Online condolences may be left at liewerfuneralhome.com BENKELMAN MEMORIAL CHAPEL IS ENTRUSTED WITH ARRANGEMENTS

Mary Ann Downing-Schwerdt was the third daughter born to Joseph Anton and Marie Anna (Podskubka) Vachuta on the family farm in Rawlins County, Kansas in June 5, 1929. She attended the Lone Tree District School ¾ of a mile south of their farm... View Obituary & Service Information

The family of Mary Ann Schwerdt created this Life Tributes page to make it easy to share your memories.

Mary Ann Downing-Schwerdt was the third daughter born to Joseph...