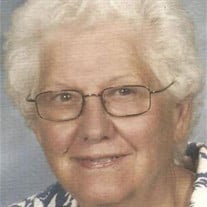 is with great sadness that the family of Mary Isabel Hillberry, announce her passing at home in Santa Maria, California, on Nov. 1, 2017. Mary was born Feb. 11, 1929, in Imperial, Nebraska, to Max Hoffmeister and Isabel (Benison) Hoffmeister. She graduated from Chase County High School in 1947. While in high school, she attended Girls State. She attended the University of Nebraska and was a member of Alpha Zeta Delta sorority. She graduated from the university with a bachelor’s degree in home economics in 1952 and started teaching. Mary married Alfred Hillberry on Nov. 23, 1952, at the Methodist Church in Imperial. Mary taught home economics for many years and then concentrated on raising her family and volunteering for numerous organizations. Mary was very involved in AAUW (American Association of University Women), serving as branch president in 1969-1970, treasurer, and circulation chair before the days of email. She was also quite involved with Minerva Club, and was instrumental in establishing the Minerva Club Trust Fund, their scholarship fund. She served as an officer and mentored later officers of the trust, which continues to do well to this day thanks to her advocacy. In addition she was involved in Eastern Star, PEO Sisterhood, and helped with Camp Fire Girls for many years. Mary was also very active in the First United Methodist Church in Santa Maria, tirelessly working on many small and large projects over the years, volunteering as needed and teaching Sunday School or helping in the nursery. Mary was devoted to her family, always there in good times and bad, always positive and encouraging. Mary loved her children and grandchildren and was fiercely proud of them all. Mary was known as a formidable bridge player, enjoyed book clubs and dinner clubs. She was confident, independent, educated, respected and above all kind. She was truly a wonderful role model, not only for her family, but for all of the many lives she influenced. A celebration of Mary’s life was held at the First United Methodist Church of Santa Maria, California, on Nov. 18, 2017. Mary will fondly be remembered by her husband of 64 years, Alfred; her sons David and Steven (Marie); and her grandchildren Dylan and Hannah. Mary is survived by her brother Max W. (Gladys) Hoffmeister of Imperial and her sister, Ruth Piva, of Lincoln and by her numerous nieces, nephews, extended family and dear friends. She was predeceased by her parents, parents-in-law and brother-in-law Louis Piva. Mary’s family, and any friends who wish to attend, will gather for her interment at Mount Hope Cemetery, Imperial, at 11 a.m. Saturday, May 5. Thereafter a lunch will be served at the First United Methodist Church at Imperial. Memorials may be made in Mary’s name to the First United Methodist Church, 311 S Broadway, Santa Maria, CA 93454. Liewer Funeral Home is entrusted with arrangements.

is with great sadness that the family of Mary Isabel Hillberry, announce her passing at home in Santa Maria, California, on Nov. 1, 2017. Mary was born Feb. 11, 1929, in Imperial, Nebraska, to Max Hoffmeister and Isabel (Benison) Hoffmeister.... View Obituary & Service Information

The family of Mary I Hillberry created this Life Tributes page to make it easy to share your memories.

is with great sadness that the family of Mary Isabel Hillberry,...