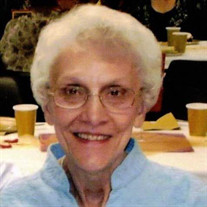 Mary Louise Harmon was born in Dryden, MI on January 1st 1939 at the home of Clarence and Elta (Brainard) Rose in the middle of a blizzard. Not being their primary doctor, unaware, he started packing up his bag when Elta called out "wait there is one more coming!" Shirley May Gayman was born at 1:40 am and Mary 17 minutes later. Mary attended Metamora Grade School from kindergarten to eighth grade. She attended high school in Lapeer MI. Mary then went to Bible College at Western Bible Institute in Morrison, CO from 1959 to graduation in 1962. Mary met her knight in shining armor, Bob Harmon, in 1961 and they were married at the Western Bible Institute Chapel on June 1st, 1962. They enjoyed a double wedding with Mary's twin sister. After Bob graduated in 1965 they started their life of serving the Lord together starting on a dairy farm in NE. But after a period, God spoke to them that it was now time to work with people, not cows. Their oldest child, Tom, was born in 1963 in Imperial, NE. Four years later in 1966, they were blessed with Tammy born in Imperial, NE. After moving to Torrington, WY where Bob served as an Associate Pastor, another gift from God was given as Valerie was born to them in 1974. In 1978 God brought Bob and Mary home to Nebraska to continue their amazing ministry of home Bible studies and discipleship. Mary's gifts came alive as she taught & trained women, youth and children in the community for many years. Mary was a woman of strong faith and had a powerful prayer life. Mary struggled many years with health issues, but especially in her last five having surgeries related to congestive heart failure. Her family started calling her the energizer bunny because she just kept going and going up until the last week of her life on earth. But, even to the end, she was always faithful to her Heavenly Father. Mary went to be with her Lord and Savior on October 21st comfortably in her home at the age of 81. Mary was preceded in death by her parents Clarence and Elta Rose, two older brothers Richard and Lawrence Rose, twin sister Shirley Gayman and nephew Terry Rose. Survivors include her husband Bob Harmon; son Tom (Kay) Harmon of Holyoke, Co; daughter Tammy (Jim) Hofman of Miller, SD; daughter Valerie (Jason) Schram of Kansas City, MO. Four grandchildren include Hayley Harmon, Dalton Harmon, Joshua Hofman and Rebecca Hofman. Sister Carol Atwood, sister-in-law Julie Rose, sister-in-law Geritta Morse, brother-in-law Martin Harmon, along with many other nieces and nephews. Funeral Service will be held Saturday afternoon, October 24, 2020, 2:00 P.M. at the Imperial Bible Church, Imperial, NE, with Rev. Jim Hofman (Son-In-Law),officiating. Interment will follow at the Crete Cemetery, Champion, NE. Visitation will be held Saturday morning, October 24, 2020, before services starting at 12:00 P.M. at the Imperial Bible Church, Imperial. In lieu of flowers a memorial has been suggested to the Maranatha Bible Camp of Maxwell, Nebraska Online condolences maybe left at Liewer Funeral Home.com (MASKS ARE NOT REQUIRED BUT RECOMMENDED, SOCIAL DISTANCING PLEASE) LIEWER FUNERAL HOME ENTRUSTED WITH ARRANGEMENTS

Mary Louise Harmon was born in Dryden, MI on January 1st 1939 at the home of Clarence and Elta (Brainard) Rose in the middle of a blizzard. Not being their primary doctor, unaware, he started packing up his bag when Elta called out "wait... View Obituary & Service Information

The family of Mary Harmon created this Life Tributes page to make it easy to share your memories.