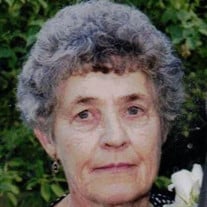 Mary Etta Gage passed away on Monday, October 19th, 2020 at North Platte Care Center. Mary was born January 15, 1937 to Clifford and Velma (Hixon) Moody in Imperial, Nebraska. She attended Wauneta Public Schools graduating in 1954, and then went on to earn her teaching certificate from McCook Community College. On December 18, 1955 Mary married the love of her life, Keith Gage, at the Wauneta United Methodist Church. They made their home on the farm north of Wauneta in the Spring Creek Valley and Hamlet areas. Mary and Keith enjoyed the next four decades together on the family farm raising five children and making a lifetime of memories. Mary taught school in a one room country school south of Wauneta and also Hiawatha School near Champion. Mary enjoyed raising chickens every summer on the farm as well as gardening and canning. Everyone loved her cooking, especially her amazing fried chicken. It was a special treat requested by her grandchildren when they would come to visit. Mary and Keith did everything together, whether it be working on the farm, in the garden, building rocking horses, and fishing. They did it together. In 1998 Mary and Keith retired to the small town life of Wauneta. They spent their first year renovating the house they purchased that was close to downtown. Mary found that being idle was something that didn’t suit her well, so for the next several years she served as the cook for the Wauneta Senior Center that was conveniently located across the alley from home. She enjoyed the wonderful people she got to spend time with, and spoke fondly of her years there. In December of 2015, Mary and Keith celebrated 60 years of marriage with their friends and families in Wauneta. In 2019, Mary moved to North Platte to be closer to family. She was living at North Platte Care Center where she was cared for by the wonderful staff who loved her ornery sense of humor, and the social time she spent with them at the front desk. Mary was preceded in death by her parents, mother and father-in-law, Lyle and Ilo Gage, husband Keith, son Robert (Bob) Gage, brother Ronnie Moody, brothers-in-law Norman Gage and Leigh Gage and Great Grandson Barrett Burenheide. Mary will be lovingly missed by daughter Jerlyn (Jon) Hohnholt of North Platte, daughter-in-law Cyndy Gage of Bella Vista, AR, son Jim (Cindy) Gage of Longmont, CO, daughter Cherie (Chris) Wallace of McCook and son Mike (Julie) Gage of North Platte, brother-in-law Rodger (Colleen) Gage of Kearney, sisters-in-law Mary Gage of Ellisville, MS, Barbara Gage of Yukon, OK and Ellen Moody of Tucson, AZ, 12 grandchildren,11 great grandchildren, and numerous nieces and nephews. Funeral Services will be held Thursday afternoon, October 29, 2020, 2:00 P.M. at the United Methodist Church of Wauneta, NE, with Pastor Elias Mukindia officiating. Interment will follow at Riverside Cemetery, Wauneta. Visitation will be held before services on Thursday morning starting at 10:30 A.M. at the United Methodist Church of Wauneta. Memorials have been suggested to the United Methodist Church of Wauneta and the Alzheimer Association. Online condolences may be left at Liewer Funeral Home.net (MASKS AND SOCIAL DISTANCING REQUIRED) LIEWER FUNERAL HOME OF WAUNETA ENTRUSTED WITH ARRANGEMENTS

The family of Mary Gage created this Life Tributes page to make it easy to share your memories.