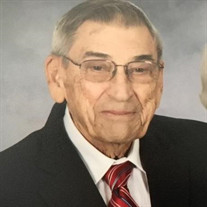 Martin Lewis Leibbrandt was born on September 20, 1926, south of McCook, NE, to Gottlieb and Mathilda (Troester) Leibbrandt. He was baptized on October 10, 1926, at St. John’s Lutheran Church, Ash Creek, NE. He was confirmed on April 19, 1940, at Peace Lutheran, McCook, NE. He married Lois Ellen Moore on March 7, 1948, at her home in Cedar Bluffs, KS. To this union 4 children were born: Charles, Steve, Kathy and Tim. Martin was involved in agriculture his entire life. His childhood and first few years of marriage were spent in production agriculture on the farm in the McCook area. He moved off the farm to Oberlin, KS, in 1953 where he began a lifelong career of striving to improve the business of agriculture. He formed the Decatur County Coop and served as manager until 1967 when he moved to Imperial, NE, to become the general Manager of what would soon become Frenchman Valley Coop. He would lead that company until his retirement in 1990. The industry of agriculture has benefited from Martin’s leadership far beyond the Frenchman Valley Coop Area. The success of Frenchman Valley Coop and the innovative, forward thinking management style of Martin, led to involvement on a larger scale. He served on councils, boards, and led formations of other companies on state and national levels. Martin received numerous awards throughout his career from many levels recognizing his contributions. He served as president of the Statewide Coop Council for many years, and was inducted to its Hall of Fame in 2002. He was honored to be recognized by the Nebraska Agriculture Business Club in 1989. His roles as advisor, director and member of various task forces have benefited many other organizations: Farm Mar-CO, Coop Service, Farm Credit, CoBank, and Burlington Railroad, to name a few. Despite his lifelong commitment to agriculture on the largest scale, his greatest love of it was still riding the combine during a good wheat harvest. He also often mentioned and took great pride in watching the development of some of the many people he employed over the years. Martin adored his grandchildren and great grandchildren. He thoroughly enjoyed being involved in their lives and attending their activities. It was a passion and priority for him to travel to visit them and stay connected. His strong faith was the most important part of his life. He was a member of Zion Lutheran Church of Imperial. There too his leadership skills were put to use. He served on many committees and held a variety of offices, including Elder and Congregational Chairman. Over the years he willingly donated his time to the needs of Zion and larger District and Synodical issues. Most importantly, the very way he lived his life was a testament of his faith and an inspiration to his family and those around him. Martin Leibbrandt passed away early Friday morning, June 1, 2018 at Kearney Regional Medical Center in Kearney, Nebraska. He was 91 years of age. He was loved and respected more than can be described by his entire family, and leaves behind: His wife Lois of 70 years, 3 children: Steve (Deb), of Imperial; Kathy Hult (Dave) of Lincoln, NE; Tim (Terri) of Imperial. 11 grandchildren: Amy Johnson (Maurice), Chad Leibbrandt (Amy), Lisa Smith (Jarod), Cyndi Weiss (Dustin), Elizabeth Tonjes (Eric), Wade Leibbrandt (Celeste), Daniel Hult, Scott Leibbrandt (Maika), Ellen Hughes (Tyler), Paula Leibbrandt, Emily Hammond (Nate). 18 great-grandchildren: Carter and Addy Leibbrandt, Kaylin Johnson, Paige and Chase Smith, Beau, Norah and Asher Weiss, Rebekah, Canaan, and Silas Tonjes, Colin and Garrett Leibbrandt, Simon and Claire Leibbrandt, Kadence and Everly Hammond, Nolan Hughes. Brother Lewis Leibbrandt (Doris) and many other nieces and nephews. He was preceded in death by his parents, 5 brothers and 1 sister, his son Charlie, and granddaughter Rebekah Hult. Funeral services will be Wednesday morning, June 6, 2018 beginning at 10:30 A.M. (MT) at Zion Lutheran Church in Imperial with Pastor David Kahle officiating. Interment will follow services in Mount Hope Cemetery in Imperial. Visitation will take place prior to services, the morning of services at Zion Lutheran Church in Imperial. A memorial has been established in Martin’s memory. Online condolences may be left at liewerfuneralhome.com LIEWER FUNERAL HOME IS ENTRUSTED WITH ARRANGEMENTS

Martin Lewis Leibbrandt was born on September 20, 1926, south of McCook, NE, to Gottlieb and Mathilda (Troester) Leibbrandt. He was baptized on October 10, 1926, at St. John&#8217;s Lutheran Church, Ash Creek, NE. He was confirmed on April... View Obituary & Service Information

The family of Martin Lewis Leibbrandt created this Life Tributes page to make it easy to share your memories.