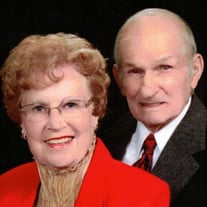 Marlin and Gloria Lutz Marlin D. Lutz, the son of Martin and Ella (Penn) Lutz passed away, Tuesday, May 28, 2019 at Elk Ridge Assisted Living in Elkhorn, Nebraska. Marlin was 88 years of age. Gloria L. Lutz, the daughter of Floyd and Ethel (Enfield) Parman followed, passing away on Saturday, July 31, 2021, at CHI Lakeside Hospital in Omaha. Gloria was 86 years of age. The couple were born in Benkelman, Nebraska. Marlin, on December 2, 1930, and Gloria, on September 30, 1934. Marlin graduated from Parks High School and Gloria attended country school through the eighth grade and then graduated from Benkelman High School in 1952. Marlin and Gloria were married on July 11, 1952, in Benkelman and soon after Marlin was drafted into the US Army. He served two years in the Korean Conflict, where he was awarded the Purple Heart, the Korean Service Medal with three Bronze Stars, United Nations Service Medal, Good Conduct Medal, and the Combat Infantry Badge. While Marlin was serving his country, Gloria attended McCook Junior College to earn her teaching certificate. She taught in the one room Hoover School until Marlin returned from the service. The couple then engaged in farming on the family farm Northwest of Benkelman until retirement in 2008, when they moved to Benkelman. Due to health concerns, Marlin and Gloria moved to Elkhorn Assisted Living in 2018, to be closer to family. Marlin enjoyed working in his vegetable garden and flower beds while living in town. He was a member of VFW, American Legion Post 65, and Zion Lutheran Church of Benkelman, where he was baptized as a child. Gloria was also a member of Zion Lutheran Church where she served many years on the church council. She was also a member of the Order of Eastern Star and her beloved bridge group for 40 years. Gloria drove a school bus for the Benkelman School District for 44 years, baked and decorated countless wedding, anniversary, graduation, and birthday cakes for so many in the Benkelman area. She was also a 4-H leader and fair worker for many years. The couple’s greatest joys in life were their friends, children, grandchildren, and great-grandchildren. The couple was preceded in death by a grandson; Michael McCreary, great- grandson; Harley Williams. Marlin was also preceded in death by his parents, brothers; Linn, Dale, and LeRoy Lutz, sister; Leanna Andres. Gloria was preceded in death by her parents, husband; Marlin of 66 years, brother and sister-in-law; Floyd Jr. and Betty Parman, and brother-in-law; Jim Biber. Marlin and Gloria are survived by daughters Cindy, and husband Charles Lorenz of Yutan, NE, Peggy Bomer of Bellevue, NE, sons; Rick Lutz of Omaha, NE, Alan and wife, Mary Lutz of Sulphur Springs, TX, and Jeff and wife, Amber Lutz of Ogallala, NE. 15 grandchildren, 10 great-grandchildren, and Gloria’s sister; Dora Biber of Grand Junction, CO. Memorial services will be held Saturday, April 23, 2022, 11:00 A.M. (MT) at the Zion Lutheran Church of Benkelman with Pastor Jim Gleason, and Brad Dokken officiating. Inurnment will follow at the Benkelman Cemetery, Benkelman, NE, with full Military Honors. Memorials may be made to the Dundy County Hospital or to the Zion Lutheran Church. both of Benkelman, Nebraska. Online condolences may be left at liewerfuneralhome.com BENKELMAN MEMORIAL CHAPEL ENTRUSTED WITH ARRANGEMENTS

The family of Marlin and Gloria Lutz created this Life Tributes page to make it easy to share your memories.

Marlin D. Lutz, the son of Martin and...