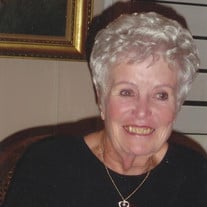 Marjorie Isabel (Tibbetts) Lesh passed away June 19th, 2015, at the age of 85. Born December 19th, 1929 in Julesburg, Colorado, to Beniah C. and Jessie I. (Cain) Tibbetts of canon City, Colorado. In 1931, the family moved back home to take over the family homestead on the south divide, south of Imperial, Nebraska. Marjorie loved her life on the ranch. She attended Prairie Rose School from the first grade through the eighth grade, when the family moved into Imperial in August of 1943. She attended Chase County High School, where she graduated in 1947. She moved to Colorado Springs, Colorado, to attend Blair Business College, graduating in 1949. After graduation, she moved to Denver, Colorado, and worked for the Cuttahay Meat packing Company as a secretary. While in Denver, she met and married Harold (Hal) Rose. In 1954 they moved to Glendale, California. She was then employed as an Office manager for McKee Engineering in the Glendale/Pasadena area and remained until she retired 40 years later. During this time she also owned and managed an apartment building, also in Glendale. Marjorie later met and married Olin Lesh. They continued to make their home in Glendale. Olin passed away in 1992. She later sold her apartment building and had a retirement home built in Indio, California. In 2005 she moved into her home at Heritage Palms in Indio. Marjie loved to travel and covered most of the world in her travels. Marjorie was a member of the Shephard of the Hills Methodist Church, the Women’s Club of Indio, the Coachella Valley History Museum and Garden Club. She was very active in all of these organizations. Marjie was a beautiful person, inside and out, with a great sense of style and beautiful smile. Preceded in death by husband, Olin, parents, grandparents, brothers; Stanley C. and Robert E. Tibbetts, Brother-In-Law; Harold Korinek. Marjorie is survived by four siblings: Marilyn Korinek, Moureen Moeller, and husband, Albert, Lynn Tibbetts and wife, Jaci, of Nebraska, and Linda Beck and husband, Glenn, of Minnesota; Sister-In-Law, Mary Tibbetts of California; Stepson, Kert Lesh and his son Kevin Lesh; 10 nieces and nephews and numerous great, and great-great nieces and nephews Graveside inurnment services will be held Saturday afternoon, September 19th, 2015, 3:00 P.M. at Mount Hope Cemetery, Imperial, with Pastor Dirk Weiss officiating. A memorial has been established in her memory.

Marjorie Isabel (Tibbetts) Lesh passed away June 19th, 2015, at the age of 85. Born December 19th, 1929 in Julesburg, Colorado, to Beniah C. and Jessie I. (Cain) Tibbetts of canon City, Colorado. In 1931, the family moved back home to take... View Obituary & Service Information

The family of Marjorie Isabel (Tibbetts) Lesh created this Life Tributes page to make it easy to share your memories.