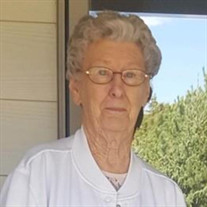 Marilyn Leigh Anderson was born March 2, 1936, at McCook, Nebraska, to Clifford and Laura Mac (McKibbin) McNeil. After her father was killed in a motorcycle accident in 1937, Marilyn and her brother Clifford moved to Oregon to live with their Aunt while their Mother, Mac, attended nursing school. Marilyn and Clifford were reunited with their mother in 1941, when she was hired as a nurse in Imperial, Nebraska, Marilyn graduated from Chase County High School with the Class of 1954. On August 25, 1954, she was united in marriage to Charles Anderson at the home of Mr. and Mrs. Harry Garber, in Imperial. To this union three children were born. They made their home on a farm near Imperial, where Marilyn was busy homemaker and mother. Marilyn was a member of the United Methodist Church of Imperial. She taught Sunday school for several years. She loved reading books, working crossword puzzles, scratch tickets and spending time with family. Preceded her in death were her parents, Clifford McNeil and Laura (Mac) Garber and Step-father; Harry Garber. Marilyn passed away Saturday afternoon, May 2, 2020, at the Chase County Community Hospital. She was 84 years of age. Survivors Include: Husband, Charlie, of Imperial, NE Daughters: Peggy Smith of Imperial, NE Betty Lee (Ed) of Imperial, NE Son: Ron Anderson of Imperial, NE 4 Grandchildren: Jarod Smith, Jamie Jussel, Holly Lempke, and Nicole Lee 2 Step-grandchildren: Tiffany Jameson and Patrick Lee 7 Great-Grandchildren Brother: Clifford McNeil of Riverside, CA Graveside Services will be held Wednesday afternoon, May 6. 2020, 1:00 P.M. (MT) at Mount Hope Cemetery, Imperial, With Rev. Melody Newman officiating. A memorial has been suggested to the Anderson Family for a future designation. On line condolences may be left at liewerfuneralhome.com (PLEASE KEEP IN MIND ALL COVID-19 PROTOCOL) LIEWER FUNERAL HOME ENTRUSTED WITH ARRANGEMENTS

Marilyn Leigh Anderson was born March 2, 1936, at McCook, Nebraska, to Clifford and Laura Mac (McKibbin) McNeil. After her father was killed in a motorcycle accident in 1937, Marilyn and her brother Clifford moved to Oregon to live with their... View Obituary & Service Information

The family of Marilyn L Anderson created this Life Tributes page to make it easy to share your memories.