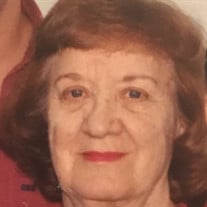 Marian Shaw Marian L.C. Baney Shaw, 99, passed away peacefully at Michael and Daniel’s home in Los Lunas, NM on Saturday, April 2, 2022. Marian was born on August 12, 1922, on the family farm NW of Benkelman, NE to Loyal Charles and Mildred Pearl Hoover Baney. Marian attended Grammar school at District 22, in a one room schoolhouse. She then attended high school in Benkelman graduating in 1940. In 1941 Marian attended Hastings Beauty School to obtain her license in cosmetology. She opened Marian’s Beauty Shop in the front of the Zorn Theatre in Benkelman in 1943. On January 19, 1953, Marian was united in marriage to Alva Leon Shaw at the Little Brown Church in the Vale, Nashua, Iowa. In the late 50s, Alva and Marian purchased the residence across from the Morehouse Hospital and Marian moved her beauty shop into their residence. She operated her beauty shop for over 70 years before her retirement. In 1955, their first child Jerry was born followed by their second son, Michael, in 1960. They lived in this house until 2002 when they moved “down the street” to their current residence. Marian was a member of the United Presbyterian Church in Benkelman. Her family was her passion raising her boys and attending their school functions. This passion continued on as she was extremely active in caring for her grandchildren and great grandchildren. She also enjoyed cooking, crocheting, playing cards, and gardening. Marian is survived by her two sons: Jerry of Benkelman, NE and Michael (Daniel) of Los Lunas, NM, 10 grandchildren, 23 great grandchildren, and 1 great- great granddaughter. Stepsister- in -law, Alice Baney, of Florida. She was preceded in death by her parents, her husband in 2012, stepfather, O. Leon Baney Sr., sisters; Winifred Phifer and Marjorie Biber, a brother; Leland Baney, and a stepbrother Leon Baney Jr. Funeral Services will be held Monday, April 11, 2022, 10:30A.M., at the Benkelman Memorial Chapel with Pastor Laura Cherry officiating. Interment will follow at Benkelman Cemetery. There will be no public viewing or visitation. Memorial Contributions may be made to American Legion Auxiliary Unit 65, 722 Dakota, Benkelman, NE 69021 Online condolences may be left at liewerfuneralhome.net BENKELMAN MEMORIAL CHAPEL ENTRUSTED WITH ARRANGEMENTS

The family of Marian LC Shaw created this Life Tributes page to make it easy to share your memories.