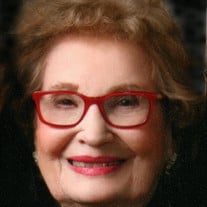 Margie Elizabeth Lorance Kitt Shackelford, 99 of Austin, Texas, passed from this life on Feb 25, 2021. Margie was born on February 7, 1922, the fourth daughter of Edith B. Burk Lorance and Cloid Albert Lorance in Dundy County, Nebraska. She graduated from Wauneta High School in 1939, and after the United States entry into World War II she moved to San Diego, California to work in an airplane assembly factory until the end of the war. Years later she joined the American Rosie the Riveter Association, an organization that recognized women’s contribution to the war effort. Following the end of the war, she returned to Nebraska where she was united in marriage with John Junior Kitt, who had been honorably discharged from his service in the war in Europe. The marriage occurred on November 25, 1945, at Mt. Zion Methodist Church in Dundy County. They moved fourteen miles south of Wauneta on the South Divide to begin their married life. Their union was blessed December 4, 1946, with the birth of twin daughters, Karrol Ann and Jerolyn Elaine, and on March 25, 1948, with the birth of their son John Lorance Kitt. The marriage ended after 46 years with the death of John Junior Kitt. Margie was remarried on May 1, 1998 to Cliff Shackelford of Wauneta, Nebraska. They were married for sixteen years, spending six months in Nebraska and six months in Arizona. Margie had a smile and friendly "Hello" to all she met and continued to have her friendly disposition all of her life. She loved being outdoors, working in her garden, grooming the yard and "getting rid of those dandelions". Margie rejoiced in sharing her garden produce with friends, relatives and neighbors. During the child rearing years, Margie was a 4-H Club Leader, taught Vacation Bible School, served as a Methodist Youth Fellowship sponsor and taught adult Bible Study. She shared her beautiful Alto voice in the Methodist Church Choir for 60 years, and taught her children to sing. Singing was a family event - at church, in the car when traveling and at home. Traveling was another joy for Margie. During WWII, she journeyed to California and worked at the Airplane Assembly Plant in San Diego. After the war, she returned to Nebraska and married Junior Kitt. They continued to travel together, and she was in most of the USA states during her lifetime. Margie is survived by twin daughters, Karrol Kitt and Jerolyn Spady (Ken), and her son, John L Kitt (Cyndia), 6 grandchildren, numerous great grandchildren, and sister Lois West. She was preceded in death by her parents, sisters Erma Kitt and Eunice Crow, husbands John Junior Kitt and Cliff Shackelford, and grandson Loren C Ramshur III. Graveside services will be held Friday Morning, March 5, 2021, 11:00 A.M. (MT) at Riverside Cemetery, Wauneta, NE, with Pastor Elias Munkindia officiating. Visitation will be held Friday morning before Graveside Services starting at 9:30 A.M. (MT) at Liewer Funeral Home, Wauneta. A memorial, in Margie’s memory, has been suggested to the United Methodist Church of Wauneta, NE. On line condolences maybe left at Liewer Funeral Home.Com LIEWER FUNERAL HOME OF WAUNETA ENTRUSTED WITH ARRANGEMENTS

Margie Elizabeth Lorance Kitt Shackelford, 99 of Austin, Texas, passed from this life on Feb 25, 2021. Margie was born on February 7, 1922, the fourth daughter of Edith B. Burk Lorance and Cloid Albert Lorance in Dundy County, Nebraska. She... View Obituary & Service Information

The family of Margie E Shackelford created this Life Tributes page to make it easy to share your memories.