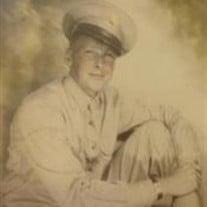 Lyle Hoffman Lyle Edwin Hoffman was born on December 3, 1921 in a house south of Naponee, NE in Harlan County. The youngest son of Phillip and Rosa (Andres) Hoffman and brother to Erma and Lynn, he lived there until the age of 8 when they moved to Dundy County and lived on what is now the Hines Ranch. The family lived there during the Depression, but they were able to survive okay as they not only farmed but also raised hogs. The family would later move to a farm closer to Haigler and continue to farm and raise dairy cattle. The year they moved closer to Haigler was the year the Republican River flooded. Lyle had gone to town and was stranded for three days during which time his family did not know what had happened to him. He attended Haigler Public School through the 11th grade and continued to live with his folks on the farm until he was drafted in June 1942. Lyle did not return home again until 1945 after serving his country during which time he received the Good Conduct Medal, WWII Victory Medal, Asiatic Pacific Service Medal with Bronze Service Arrowhead and the Philippine Liberation Ribbon. Growing up in Haigler with the Wall boys, you never knew what kind of mischief they would be up to. Lyle met his future wife, Fern Cox, while rounding up frogs at the Morehouse Hospital in Benkelman and that too is another story. They were married on March 8, 1947 and would have celebrated their 67th anniversary next year. Two children were born to this union, Randal (Randy) Alan and Jann Marie. Lyle worked road construction most of his adult life as a heavy machine operator for over 20 years before he was offered a job on the Dundy County Roads Department which allowed him to stay home instead of traveling all the time. He was with the County for 17 years before retiring. Fern and Lyle spent their married life in the Haigler Community until 1998, when they moved to Alma to be closer to Lyle’s roots. During the next years, they moved back and forth between Alma and Benkelman and then Wray, CO before settling in Benkelman. Working road construction all those years and travelling must have made it hard for him to stay in one place. Lyle’s pride and joy were his grandchildren and later his great-grandchildren. Preceding him in death were his parents, Phillip and Rosa, his sister Erma Soehner, his brother Lynn Hoffman and twin great-grandsons Braden and Brandon Rochefort. Survivors include his wife of 66 years, Fern of Benkelman, son Randy and wife Theresa of Kersey, CO, daughter Jann and husband Mike Clark of Benkelman; grandchildren: Michael Brunswig and wife Shalia of Benkelman, Amber Rochefort and husband Chris of Germany, Mark Brunswig and girlfriend Shawntel Pena of Benkelman, Ashley Braziel and husband TJ of Humble, TX, Chelsea Harmon and husband Brad of Greeley, CO and Coy Clark of Chadron; also great-granddaughters Callie and Kaelin Rochefort of Germany and Great-grandson Noah, due in December; niece Cheri Steinhoff, Erma’s daughter of Wray, CO; cousins: Kaye Kamla and family of Haigler, Shirley Ruth Weaver and family of Denver, Andrea and husband Wendell Huggins and family of Evergreen, CO; sister-in-law Pearle Hart of Denver, brother-in-law and sister-in-law Don and Agnes Cox of Omaha and many nieces, nephews and cousins. Lyle fought a brave fight and gave up the battle on Saturday, November 16th at the Hester Home in Benkelman surrounded by family. Memorial services will be held 11:00 A.M., Friday, November 22, 2013 at the Benkelman Community Building with Pastor Sheila Taylor officiating. Military Rites will follow at Benkelman Cemetery, Benkelman, Nebraska. A private family inurnment will take place at a later date. There will be no visitation, Lyle chose cremation. In Lieu of flowers, memorials are suggested to Home Health and Hospice or the VA. Online condolences can be left at liewerfuneralhome.com BENKELMAN MEMORIAL CHAPEL IS IN CHARGE OF ARRANGEMENTS.

Lyle Hoffman Lyle Edwin Hoffman was born on December 3, 1921 in a house south of Naponee, NE in Harlan County. The youngest son of Phillip and Rosa (Andres) Hoffman and brother to Erma and Lynn, he lived there until the age of 8 when they... View Obituary & Service Information

The family of Lyle Edwin Hoffman created this Life Tributes page to make it easy to share your memories.