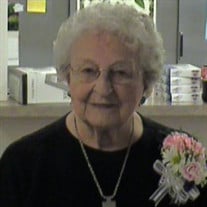 Lucille M. McBride Lucille Maurine McBride was born Sept. 25, 1920, to Merle (Williams) Porter and Ed Porter north of Wauneta on what would be remembered as the Wesley Wheeler farm. At the age of three she, her parents and sister, Lois (eight years older) moved to a farm in the Eden Precinct of Hitchcock County southwest of Wauneta and there resided for all of her childhood and most of her adulthood. When Lucille was eight years old her mother passed away. She attended Eden School District #54 one mile west of the farmstead through all her grade school years. She then attended Wauneta Rural High School and graduated with the class of 1937. She was very active in many school activities, especially any that involved music. She became acquainted with Vearl McBride and eventually they married on Aug. 18, 1939 in Stratton. The couple immediately moved to Denver, a move because of employment. They lived in Denver until March of 1943. During that time, in 1941, their first son, Lynn, was born. In 1943 the McBrides moved back to the home place and farmed for many years. During that time, in 1945, their second son, Vaughn was born in McCook. Lucille was a vital part of the farming operation, became well known for her ability to manage a household, distinguished herself with her cooking and canning abilities and at the same time was a vital member of the Eden Sunshine Club, building a cherished relationship with neighborhood ladies. Also during those years she managed the family while being employed in Wauneta, first at Hoff’s Grocery, then at the Co-op Exchange Office. In 1965 Lucille and Vearl moved to Ogallala. While there she worked at TRW Corporation, was the head housekeeper at the Ramada Inn for five years and worked as a receptionist at a realtor’s office for a year. The McBrides moved back to Wauneta, a move back home supposedly for their retirement. Lucille, however, worked several years as a bookkeeper for the Jussel Oil Company. Lucille will undoubtedly be remembered most for her love of, and exceptional skills, in music. She was the community’s consummate pianist, playing for any service or occasion at which good music was wanted or needed. She spent many years as THE musician and accompanist for the Mt. Zion Methodist Church southwest of Wauneta, then for the United Methodist Church in town. She had the uncanny ability to, not only play a written piece of music but could play almost any song she had ever heard simply by ear. Her house and all surroundings were hardly ever devoid of the beautiful music she created. She very seldom missed church and held various offices over a large span of years (she was a diligent student of the Bible and wrote countless study guides and curricula for various church groups all the while.) Another love was writing a weekly column for the Wauneta Breeze, a relationship that lasted for some 20 years. The usual comment she received was, “I love your writing. Your column is the main reason I read the paper each week.” Lucille was preceded in death by her parents; her husband Vearl; her sister Lois, and her brother-in-law Ed Nowka; and as usual many other relatives. She is survived by her sons, Lynn and Vaughn. Additionally she is survived by Lynn’s wife Janie and granddaughters Mikki and Lori, who, in combination, blessed her with eight great-grandchildren and three great-great-grandchildren. Vaughn and his wife Dee blessed her with two grandsons. She is survived by Darren McBride ad his wife Victoria; along with great-grandbabies Breanna and Jackson Brett. Lucille is also survived by Devon McBride and Mandy and Makenna Ring. Funeral service will be held Saturday July 25, 2020, 10:30 a.m. MT at the United Methodist Church of Wauneta, with Pastor Elias Mukindia officiating. Interment will follow at Riverside Cemetery, Wauneta. Visitation will be held Friday afternoon, July 24, 2020, 2-6:00 P.M. at the funeral home in Wauneta. A Memorial has been suggested to the United Methodist Church of Wauneta Online condolences may be left at liewerfuneralhome.com. LIEWER FUNERAL HOME ENTRUSTED WITH ARRANGEMENTS

Lucille M. McBride Lucille Maurine McBride was born Sept. 25, 1920, to Merle (Williams) Porter and Ed Porter north of Wauneta on what would be remembered as the Wesley Wheeler farm. At the age of three she, her parents and sister, Lois (eight... View Obituary & Service Information

The family of Lucille M McBride created this Life Tributes page to make it easy to share your memories.