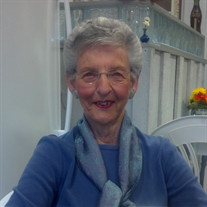 LUCILLE BAUERLE Winifred Lucille Bauerle was born at Royal, Nebraska, on July 10, 1936 to Ivar and Veralin “Susie” Johnson. She graduated from Chase County High School in 1953. On April 15, 1956 she married Burdette Louis Bauerle. They were married and lived in Imperial, NE their entire 59 years of marriage. Lucille spent two summers during her high school years working in Estes Park at the Ranch House. After graduation she worked at Einspahr Drug Store, Farm Bureau, and the Chase County Extension Office. Later she actively supported the family farm and enjoyed driving a truck for corn harvest. In her service to others, she was an active member of the First United Methodist Church in Imperial, NE and was involved in numerous administrative and leadership roles and church programs throughout the years. Most recently she was president elect for the United Methodist Women. Last year she assisted with the construction of the stained glass cross hanging in the church sanctuary as well as assisted with refurbishing and installation of the stained glass windows during the construction of the church in the early 1990’s. She coordinated Wednesday Night Alive meals for families at the church, she loved preparing for the church bazaar, and she attended the Early Bird Bible study. Her prayer journal was overflowing with names of those she prayed for in her community. She volunteered at the Imperial pantry, was a long time member of local extension clubs and she rarely missed the daily 9:00 am gathering of friends for coffee. Her involvement with 4-H included being a leader for numerous clubs and was a mentor to young adults. She enjoyed many hobbies including stained glass, Brazilian embroidery, knitting/crocheting prayer shawls, sewing, quilting, and cake decorating. Her love of flowers and gardening showed as her yard flourished with beautiful flowers and vegetables that she lovingly tended to. She enjoyed traveling to numerous sites across the United States with her husband, brother and sister-in-law, Richard and Jean Johnson; and family friends, Jess and Joyce Bernard. Lucille had boundless energy and a positive outlook on life. After conquering a diagnosis of cancer in year 2000 she said she had “more to do”. She served others in so many ways and was a friend to many. She was a loving wife and devoted mother. Lucille passed away Saturday morning, December 26th, 2015, at her home just west of Imperial. She was 79 years of age. Lucille was preceded in death by her parents, Ivar and Susie Johnson and sister-in-law Wilma Johnson. Survivors include her husband, Burdette Bauerle and two daughters Rhonda Pierce and husband Dick of Oswego, IL and Diane Bauerle of Littleton, CO; brothers and sisters include Kathryn Willats and husband Robert of Glen Bernie, MD; Bryon Johnson of Colorado Springs, CO; Richard Johnson and wife Jean of Imperial, NE; Nettie Nordhausen and husband Clinton of Imperial, NE. Lucille didn’t have any grandchildren but dearly loved her all of nieces, nephews and their children. Funeral Services will be held on Tuesday, December 29th, 2015, at the First United Methodist Church of Imperial with Pastor Dirk Weiss and Rev. Melody Newman officiating. Interment will follow at Mount Hope Cemetery in Imperial. Keyboard music provided by Marcia Bauerle and soloist; Marcia Lindau. Memorial donations may be made to the First United Methodist Church Memorial Fund, 420 Holland Street, Imperial, NE 69033 Visitation will be held at the First United Methodist Church, prior to services, same day as services. Online condolences can be left at liewerfuneralhome.com LIEWER FUNERAL HOME IS ENTRUSTED WITH ARRANGEMENTS

The family of Lucille Bauerle created this Life Tributes page to make it easy to share your memories.