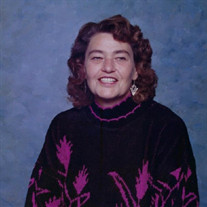 Louisa Kathryn was born April 30, 1932 near Haigler, Nebraska to Elizabeth (Brown) Philips and Robert G. Robinson. She attended school in Benkelman, Nebraska. Louisa was married several times; to Eldon Wolfe in Haigler, NE, Glenn Unverzagt in St.Helens, OR, Howard Burns in Idaho Falls, ID and Lloyd Newbanks in Wray, CO She lived in various states and when she divorced her last husband she decided to move home and live near her mother who was living in Max, NE. Louisa settled in Benkelman. She enjoyed going to church, gardening, her turtles and visiting anyone who would stop by her front porch. She was especially fond of the young lady, Maddie WindHolz that lived behind her and would come by to visit often. Louisa's neighbors, Jerry and Alana Keilsa, were a blessing in her life. She deeply cared for them and appreciated all they did for her. Louisa worked many jobs such as waitress, potato plant production worker, motor route newspaper carrier, bag plant security, daycare operator, housekeeper, bird-seed factory worker and care facility assistant. She would do whatever it took to support her children. Her favorite memory of working was waitressing at “Doc’s Café” in Idaho Falls, ID. She was thrilled when several of her daughters were able to work alongside her. Louisa was a member of the First Methodist Church in Max, NE. Louisa loved animals! She was proud to be called the “turtle lady” when she moved back to Benkelman, as she raised turtles and at one time had a snapper named Buddy that grew up to weigh 200lbs. Her dog, Andy, was her best friend in her later years. During her life she often took in “teens in need”. Although she never had any extra money and eight kids of her own, she always was willing to help anyone who the girls hauled home. She was considered “Mom” by all of her children’s friends. Louisa loved that she was a grandma and a great-grandma! She kept every letter or card that had been sent to her for all of her life! She always looked forward to news of the happenings in her large family as all of her children lived away in Washington, Oregon, Idaho, Wyoming, Texas and North Carolina. Louisa was blessed to have sister, Florence Parker, live near her. Louisa passed away late Wednesday evening, November 27, 2019 at the Wauneta Care and Therapy Center in Wauneta, Nebraska. She was 87 years of age. She was preceded in death by her parents, grandson, Anthony M. Burris and great-grandson Isaiah M. Perez. Survivors include: son, Lester Wolfe and wife Patricia; daughters: GaBriela DuBois, Connie (Kirk) Bumgarner, Shelley (Randy) Savage, Rebecca (Larry) McLain, Sandra (Jarvis) Swogger, Tracy Rivas, Verlene (Gregg) Matney; grandchildren: Jeffrey Wolfe, Eric Wolfe, Vanessa Burris, D. Jonathan Burris, Tabitha Tarricone, M. Seanan Burris, Tiffany Mims, Meranda Whitmore, Melissa Savage, Joesph McLain, Jessica Swogger, Joseph Swogger, Amanda Holbert, Casey Holbert, Megan Hansen, and Danny Matney; great-grandchildren: Giovanni Burris, Hermione Burris, Chas Burris, Lucas Burris, Anthony Burris, Lilly Burris, Angelica Burris, Dakota Thornley, Devin Thornley, Kianna Hollis, Dimitri Hollis, Mekai Hollis, Carmello Mims, Roy Mims III, Prince Mims, Lyric Mims, Taylor Whitmore, Alexis Savage, Angelina McLain, Austin McLain, Siverio Perez, Miziahel Holbert, Breanna Holbert , Breille Holbert, Braylee Holbert, and Rhia Wright-Hansen; brothers: Russell (Florence) Robinson and Gail (Marsha) Manning; sisters: Charlotte Hinshaw, Florence (Roger) Parker, and Ellen (Bob) Standley. Immediate burial took place in the Benkelman Cemetery in Benkelman, Nebraska on November 28, 2019. No viewing or visitation. A celebration of life service is being planned for the spring of 2020, the date and location will be announced at a later date. A memorial has been established to the family of Louisa Kathryn for future designation. Online condolences may be left at liewerfuneralhome.com BENKELMAN MEMORIAL CHAPEL IS ENTRUSTED WITH ARRANGEMENTS

The family of Louisa Kathryn created this Life Tributes page to make it easy to share your memories.