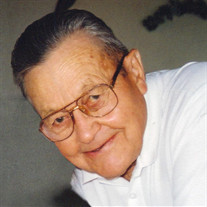 Robert Loran Wright was born May 31, 1923, in Hayes County, Nebraska, east of Wauneta, to William (Ferd) F. and Elva I (Akers) Wright. Loran attended country grade school and Wauneta High School. Loran assisted on the family farm before marrying Rose Irene DeHart on August 14, 1943, in Atwood, Kansas. The couple settled on his family’s farm northwest of Wauneta, before he was inducted into the U.S. Army in May of 1945. Loran served in the European Theatre at the end of WWII. He was discharged in August of 1946, and returned to farming northwest of Wauneta. Loran and Irene moved to the Art Luhrs farm north of Enders, Nebraska, where they lived for a short time before moving to the Arch Leopold farm south of Palisade, Nebraska. In 1964, they moved to the Rufus Lentz farm where they resided until retirement in 1985. The couple then made Palisade their home until present. Loran was a member of the United Methodist Church, the American Legion Post of Wauneta, and the Veteran of Foreign Wars Post of Palisade. He enjoyed farming and farm life. Loran also enjoyed hunting, fishing, and woodworking in his spare time. He never missed coffee time at the Palisade COOP, if he could help it. Loran passed away Wednesday afternoon, December 27, 2017, at the Wauneta Care and Therapy Center. He was 94 years of age. Survivors Include: Wife, Irene of Palisade, Nebraska Daughter: Bonnie Johnson and Husband, Lloyd, of Ogallala, NE Grandchildren: Mike Johnson, Shannon Johnson, and Kiane ( Chris) Pierson Great-Grandson: Dillon Pierson Sister-In-law: Irene Wright of Roswell, NM Loran was preceded in death by his parents, Son: Bob, granddaughter; Tiffany Jo Johnson, infant sister; Virginia Fern, sisters; Beulah and Esther, brothers; Harold and Don. Funeral services will be held Tuesday, January 2nd, 2018, 11:00 A.M. (Central Time) at the United Methodist Church of Palisade, Nebraska, with Pastor Elias Mukindia officiating. Interment will follow at 2:00 P.M. (Mountain Time) Riverside Cemetery, Wauneta, Nebraska. Visitation will be held Tuesday morning, January 2nd, 2018, starting at 9:00 A.M. (Central Time) before services. A memorial has been established in Loran’s memory. On line condolences maybe left at liewerfuneralhome.com LIEWER FUNERAL HOME OF WAUNETA ENTRUSTED WITH ARRANGEMENTS

The family of Loran Wright created this Life Tributes page to make it easy to share your memories.