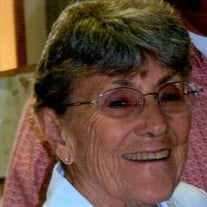 Loraine Elizabeth (Blakesley) Davidson (age 88) was born December 25, 1929, in Holyoke, Colorado, to Glenn and Alice (Goodman) Blakesley. She went to be with her Lord on March 13, 2018, at Imperial Nebraska. She attended school in Holyoke, Colorado, and graduated from Holyoke High School. She was united in marriage to Glen Davidson on December 12, 1948, at the Holyoke Baptist Church, in Holyoke, Colorado. They settled on the old Davidson farmstead northwest of Lamar, Nebraska, and lived there until they built a home south of Lamar in 1959. They resided there more than fifty years and Loraine resided there after Glen’s death until her health precipitated her move to assisted living in Imperial, Nebraska. To this union three children were born, Ross, Mark, and Deon. Loraine accepted the Lord at a young age and was baptized into His death and was a member of the Holyoke Baptist Church. After her marriage, Loraine and Glen were members of the Lamar Christian Church until its closing. They attended First Christian Church, Holyoke, Colorado, until their health no longer allowed. Loraine was a farmer’s wife and mother, working alongside Glen driving trucks and grain carts during harvest, working cattle, moving equipment and other duties as well as keeping a nice home and raising the children. For many years she participated in all the parties for the children’s school activities. She was a charter member of the Lamar Extension Club and remained a member until its cessation. Loraine and Glen enjoyed traveling and traveled to Hawaii, England, Scotland, Ireland, Wales, Mexico, Jamaica, and the Bahama Islands. She enjoyed visits from her family, particularly her grandchildren and great-grandchildren. Loraine was preceded in death by her parents, husband, Glen Davidson, and sister Holly “Hazel” Lane Survivors Include: sister, Katherine Roth, Brush, Colorado; brother, Earle Blakesley, Kawaii, Hawaii, sons; Ross (Loretta) Davidson, Sterling Colorado; Mark (Peggi) Davidson, Lamar, Nebraska; daughter, Deon Skomp (Tim Bartels) Lamar, Nebraska; grandsons; Chance (Jessica) Skomp, Lamar, Nebraska, Colton Skomp, Lamar, Nebraska, Craig Davidson, Omaha, Nebraska; granddaughter, Janette (Travis) Hieber, Imperial, Nebraska, great-grandsons, Canton and Calder Stomp, Lamar, Nebraska and Nolan Hieber, Imperial, Nebraska; and numerous nieces and nephews. Loraine chose cremation and a private family service will be held at a later date. Suggested memorials to the Lamar Fire Department or Donor’s choice On line condolences may be left at liewerfuneralhome.com LIEWER FUNERAL HOME ENTRUSTED WITH ARRANGEMENTS

Loraine Elizabeth (Blakesley) Davidson (age 88) was born December 25, 1929, in Holyoke, Colorado, to Glenn and Alice (Goodman) Blakesley. She went to be with her Lord on March 13, 2018, at Imperial Nebraska. She attended school in Holyoke, Colorado,... View Obituary & Service Information

The family of Loraine Elizabeth Davidson created this Life Tributes page to make it easy to share your memories.