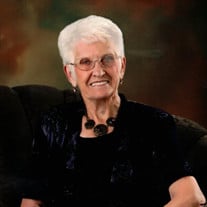 Lois G. May, 98, of Hayes Center, NE, passed away January 12, 2019, at St. Luke’s Care Center in Kearney. The oldest of six children, Lois was born on Good Friday, March 26, 1920, to Guy F. and Florence H. (Long) West near Wauneta, NE. After graduating from Wauneta High School in 1938, she found employment in Hayes Center where she met and later was married to Richard May on May 9, 1942. The wedding, held at the Eden parsonage, was a double wedding with Lois’s sister Melba and her husband, Warren Richter. Richard and Lois made their home in rural Hayes Center and were blessed with four sons: Kent, Kim, Ricky, and Rocky. In addition to the daily demands of being a farm wife, Lois also enjoyed quilting, walking, supporting the Hayes Center Cardinals, and following her favorite New York Yankees. She was a beloved mother and mother-in-law and the perfect “Gran” who endured all kinds of weather supporting her family at every activity she could attend. She spoiled her family with the “best peach pie ever made,” delicious cinnamon rolls, and homemade peach jelly. Lois was a faithful member of Union Congregational United Church of Christ and a devoted volunteer at the Hayes Center Senior Center. She was a member of the Rebekah Lodge and worked in the Hayes County Treasurer’s Office for twenty years. A double cancer survivor in her eighties, Lois eventually moved from Hayes Center to Country House in Kearney, Nebraska. While residing there the last two years of her life, she enjoyed many activities and always wore a welcome smile for any visitor. A highlight in her life was in 2000 when the Richard and Lois May Family received the Fischer Family Award from the Nebraska High School Sports Hall of Fame. Lois was preceded in death by her parents; husband, Richard; grandson, Kyle May; sisters, Melba (Warren) Richter and Rawleyce (Danny) Rife; brothers, Arwyn West and Ron (Julie) West; and brother-in-law, Bob Dahnke. Lois is survived by her four sons and their wives, Kent and Cheryl May, Hayes Center, Kim and Gail May, Omaha, Ricky and Lana May, Hayes Center, and Rocky and Mary May, North Platte; sister, Mary Ellen Dahnke, Stratton; sister-in-law, Lois West, Stratton; grandchildren, Brent (Kimmie) May, Todd May, Angie (Chris) Seip, Brandon (Eva) May, Nolan (Erin) May, Rhea (Craig) Softley, and Kristin (Jeff) Hubby; nineteen great-grandchildren; as well as many dear nieces and nephews. Memorial services will be Thursday afternoon, January 17th, 2019; 1:00 P.M. (CT) at the Union Congregational United Church of Christ in Hayes Center with Pastor Jean Miller officiating. A private family inurnment will take place in the Hayes Center Cemetery. No viewing; Lois chose cremation. In lieu of flowers, memorials may be given in Lois’s name to the Hayes Center Senior Center or Union Congregational United Church of Christ. Online condolences may be left at liewerfunearlhome.com LIEWER FUNERAL HOME OF WAUNETA IS ENTRUSTED WITH ARRANGEMENTS

The family of Lois G. May created this Life Tributes page to make it easy to share your memories.