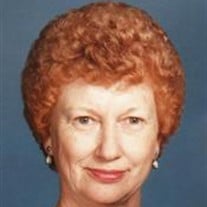 Lois Ann (Denker) Greeley was born Nov. 7, 1934, to William G. and Bertha K. (Bischoff) Denker on a farm south of Wauneta, Neb. Lois was baptized on Nov. 25, 1934, at the farm home on the south divide. Lois grew up and attended country school through the 8th grade. She then attended Wauneta High School, graduating in 1953. From a small child she was raised in the Lutheran faith and was confirmed on March 21, 1948, at St. Paul’s Lutheran Church, rural Wauneta. Lois worked at several jobs after high school which included Berry’s Drug Store and the Wauneta Falls Bank. During this time, Lois enjoyed many activities including bowling, playing softball and attending dances. At one of these dances she met her future husband, Richard Wade Greeley, of Hayes Center, Neb. Lois and Richard were married on April 2, 1961, at St. Paul’s Lutheran Church, rural Wauneta. Shortly after they were married Richard was called back into the service and was stationed in Olympia, Wash., where Lois joined him. They returned to Wauneta in the fall of 1962, where they raised their family and made their home until present. Lois was a loving wife, mother and grandmother and a special resident to those who so lovingly took care of her during her years at Sunrise Heights. She enjoyed golfing, playing cards, being a homemaker and spending time and attending her grandchildren’s school events. Lois passed away early Thursday morning, July 4, 2013, at Sunrise Heights Nursing Home in Wauneta. She was 78 years of age. Lois was preceded in death by her parents, William and Bertha Denker. Survivors included her husband of 52 years, Richard; daughters, Rochelle Wieman and husband, Gary, of Lincoln, Neb. and Rhona O’Neil and husband, Brian, of Wauneta, Neb.; four grandchildren, Brittany and Brandon O’Neil and Morgan and Keaton Wieman; brother, LaVern Denker and wife, Elinor, of Wauneta, Neb.; sister-in-law, Laverda Loomis and husband, Don, of Arvada, Colo.; several nieces and nephews. Funeral services were held Monday, July 8, 2013, 10:30 a.m., at Redeemer Lutheran Church, Wauneta, Neb. with Pastor Greg Stuckwisch officiating. Mrs. Berneta Steinert was organist. Casketbearers were Brian O’Neil, Gary Wieman, Brandon O’Neil, Scott Johnson, Bill Bischoff and Lee Denker. Interment was held at Riverside Cemetery, Wauneta, Neb. Online condolences may be left at liewerfuneralhome.com. Liewer Funeral Home of Wauneta was in charge of arrangements.

Lois Ann (Denker) Greeley was born Nov. 7, 1934, to William G. and Bertha K. (Bischoff) Denker on a farm south of Wauneta, Neb. Lois was baptized on Nov. 25, 1934, at the farm home on the south divide. Lois grew up and attended... View Obituary & Service Information

The family of Lois Ann Greeley created this Life Tributes page to make it easy to share your memories.