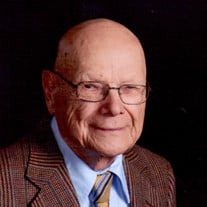 Lloyd R. Dobney Lloyd Roy Dobney was born, November 23rd, 1923, in Norfolk, Nebraska, to Frank R. and Martha A. (Otto) Dobney. Lloyd attended Norfolk Public Schools and graduated from Norfolk High School in 1942. After graduation, Lloyd applied for pilot training in the Army Pilot Training Program. He received his pilot wings in 1944 and proceeded to complete B-17 transition. He volunteered to fly B-29’s, which led him to Tinian in the Mariana Islands. He flew 9 weather reconnaissance missions over Japan. He flew his 10th mission participating in a flight of 500 B-29’s over Tokyo on September 2, 1945, as General MacArthur was accepting Japan’s surrender on the battleship Missouri in Tokyo Bay. Lloyd was separated from active duty in December of 1945 and enrolled in the University of Nebraska, where he received a degree in Civil Engineering. During the Korean War he was recalled to the U.S. Air Force and spent 15 months with the Air Force in England. Lloyd married Patricia Ann Warrick on June 10th, 1956, in Norfolk, Nebraska. The couple started their married life in Verdun and Paris, France. Lloyd’s work with the Army Corps of Engineers took them to Wiesbaden, Germany, where they lived for three years. They enjoyed traveling to many beautiful countries and locales during their time overseas. Lloyd and Patricia eventually settled in Omaha, Nebraska, where they raised their two children, Douglas and Elizabeth. Lloyd began work with the U.S. Air Force Strategic Air Command in Omaha in the Department of Civil Engineering, where he was employed for 25 years, retiring from the Air Force in 1985. Lloyd and Patricia moved to Colorado Springs, CO, in 1991, when Patricia retired from teaching school. Lloyd and Patricia were members of St. Michael’s Episcopal Church for 25 years and most recently members of Zion Lutheran Church in Imperial, Nebraska. Lloyd was a 50+ year member (Master Mason) of the Mosaic Lodge No. 55 of Norfolk, NE. He loved the outdoors and enjoyed walking and hiking, particularly on the many trails around Colorado Springs. He was also a bird watcher, and enjoyed coin and stamp collecting. Lloyd was a loving and devoted husband, father, and grandfather. Lloyd passed away July 6th, 2018, at the Imperial Manor, Imperial, Nebraska. He was 94 years of age. Lloyd was preceded in death by his parents, Frank and Martha Dobney; beloved wife, Patricia; son, Douglas; and brother, Harold. Survivors include: Daughter: Elizabeth (Dirk) Haarberg of Imperial, NE. Daughter-in-law: Rosemary Dobney of Fresno, CA. Grandchildren: Charles (Danielle) Haarberg, Sam (Kristen Jussel) Haarberg, and Alyson Dobney. Funeral services will be held Thursday morning, July 12th, 2018, 10:30A.M. at the Zion Lutheran Church of Imperial, Ne with Pastor David Kahle officiating. A private family inurnment of cremains will follow Friday, July 13th2018, at St. Michael the Archangel Episcopal Columbarium in Colorado Springs, CO., with full military honors. Memorials have been established in Lloyd’s memory to Zion Lutheran Church of Imperial and the Imperial Community Foundation Fund. Online condolences may be left at liewerfuneralhome.com LIEWER FUNERAL HOME IS ENTRUSTED WITH ARRANGEMENTS

The family of Lloyd R. Dobney created this Life Tributes page to make it easy to share your memories.