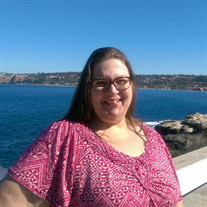 Lisa Renae (Hink) Fuehrer was born Aug. 22, 1966, to Leo and Elaine (Mendenhall) Hink in Imperial, Neb. She was baptized Sept. 11, 1966, and confirmed April 6, 1980, at Zion Lutheran Church in Imperial. She attended Champion Grade School in Champion and graduated from Chase County High School in Imperial in 1984. Lisa was active in 4-H, Girl Scouts, Future Homemakers of America (FHA), Lutheran Youth Fellowship (LYF) and show choir. She spent many hours helping her dad, Leo Hink, around the farm and in his blacksmith shop. She attended Chadron State College for a time where she continued her participation in show choir. She was known for her beautiful soprano voice. Lisa later moved to McCook where she attended McCook Community College. She married Kurt Fuehrer April 19, 1991, on the banks of Champion Lake in Champion with Rev. Francis Baker officiating. The couple settled in Champion and raised three children—Rebecca, Trevor and Krista. Lisa lived in numerous communities in Nebraska as well as Texas before finding her final home in Colorado. She found her adult church home in the Denton United Methodist Church in Denton, Neb. where she served on numerous committees. She also served as the Cub Scouts leader for Trevor’s pack in Crete, Neb. In 1999, she began working for Linweld (now Matheson Tri-Gas) in Lincoln. She moved to Denver, Colo., in 2007 where she continued her career at Linweld. She served as the office manager for the Denver Matheson Tri-Gas store at the time of her death. While in Colorado, she continued her education and earned a bachelor of science degree in organizational management in Christian leadership from Colorado Christian University. Lisa loved life and shared wonderful stories and laughter with all around her. She passed her life-long love for horses to her eldest daughter, Becky. She and her son, Trevor, spent numerous hours watching “cheesy” horror movies. She loved to watch him play football during his high school years. Krista learned appreciation of coffee from her mother, who was a self-proclaimed coffee snob. Lisa embraced grandparenthood and treasured every moment with her two young granddaughters and was excited to welcome a third grandchild later this year. She was diagnosed with heart disease in the early 2000s but never let her illness slow her down. She lived life to the fullest. She had a big heart, something that was immediately apparent to all who knew or met her. For those whose lives she touched, she had the ability to show exactly how important and loved they were, especially when they were blessed with one of her warm, all-enveloping hugs. Lisa was driving to work on Saturday, April 9 when she experienced a heart incident, which caused a car accident. Her heart was no longer beating when EMTs arrived on scene. CPR was performed and they were able to revive her after she arrived at the hospital. After the accident, she showed little sign of brain activity and passed away in the early morning hours on Tuesday, April 12, 2016, at North Suburban Medical Center in Thornton, Colo., surrounded by her children and family. She was 49 years of age. Lisa was preceded in death by her father, Leo Hink; grandparents Pearl and Ted Hink, Henrietta Hink and Lyle Mendenhall; uncles, Donald Hink and Earnest Hink; aunt, Darlene Day; and cousin, Arlyn Day. She is survived by her mother, Elaine Hink of Imperial; three children, Becky (Jeff) Friedman of Bellevue, Trevor Fuehrer and Krista Fuehrer, both of Denver, Colo.; grandchildren, Ryleigh Friedman, Trystnn Fuehrer and one on the way; her children’s father, Kurt Fuehrer of Imperial; sisters, Davon (Russ) DaMoude and Sheri (Brad) Hink-Wagner, all of Imperial; nieces and nephews, Makayla and Joel DaMoude and Ty, Leo and Lana Hink-Wagner; many cousins, family members and treasured friends. A memorial service celebrating Lisa’s life will be held at 10:30 a.m. MT/ 11:30 a.m. CT Saturday, April 23 at the Champion Community Center in Champion. Lisa’s children wish for the service to serve as a celebration of Lisa’s life and encourage those who attend to wear bright colors. Inurnment will follow at Crete Cemetery in Champion. There will be no visitation as Lisa chose cremation. A memorial has been established to the American Heart Association. Online condolences can be left at liewerfuneralhome.com. Liewer Funeral Home is entrusted with arrangements

The family of Lisa Renae Fuehrer created this Life Tributes page to make it easy to share your memories.