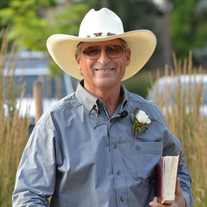 Lex Thompson Lex Eugene Thompson was born at Burwell, Neb., on Jan. 16, during the blizzard of 1949, to Loyal Burton Thompson and Ina Faye (Daiss). The family then moved to Grant, Neb., where Lex attended elementary school at Rural District 15 and graduated from Perkins County High School in 1967. After graduation, Lex enlisted in the Navy and served aboard the USS Hancock. He completed his tour of duty and attended veterinary school at Texas A&M, earning his DVM in 1978. Lex practiced veterinary medicine in Texas and southwest Nebraska. In 1988, he became a founding partner of Veterinary Services in Imperial with Dr. Dave Johnsen. Lex built many lasting relationships with his clients during the 40 years that he practiced. After his cancer diagnosis, he carried those relationships in his heart, and they extended to his employment with Newport Labs, where he worked as a Technical Services Veterinarian following his retirement. On Aug. 16, 1985, Lex married Jodi (Moreland) Gould of Imperial. He was a loving husband and became a devoted father to her two young sons, Jovic and Jared. He encouraged the dreams of his boys and walked with them through their trials. His love grew to embrace Jared’s wife, Lyndsey; in his heart, she was his daughter. He treasured his grandchildren. For them he was a patient and steady guide, a grandpa who always had open arms and an empty lap. He instigated many of their adventures and laughed with them daily. Lex’s faith in Jesus became the guiding light of his life. His passions were sharing the Gospel, particularly with those who were hurting, and spending time with his family. He adored his nieces and nephews and mentored many other young people, whom he loved like his own family. His other passion was golf, where he enjoyed the challenge of playing new courses. He had a lifelong enthusiasm for hunting, farming, and being on the lake. Adventuring on the backroads and watching sunsets from Baker Hill were two of Lex’s great joys. Lex passed away on Monday, March 23, in Littleton, Colo., at the age of 71. He was in hospice care, surrounded by his family and friends. Lex is survived by his wife of 34 years, Jodi (Moreland) of Imperial; son Jared (Lyndsey) Thompson of Denver, with their children Skye and Brody, and Jared’s daughter Bryarrose; parents Loyal and Ina Thompson of Grant, Neb.; sister Trudy (Rod) Beemer of Imperial; brother Allen (Cyndi) Thompson of Rocheport, Mo.; sister Renae (Mark) Bottom of Grant, Neb.; sister-in-law Kathy (Butch) Loring of Imperial; sister-in-law Pat Schoenfelder of Imperial; brother-in-law Mike (Jane) Moreland of Vero Beach, Fla., and Imperial; sister-in-law Kerry (Britt) German of Cozad, Neb. Over the years, Lex enjoyed a close relationship with many of his nieces and nephews. In this regard, he is survived by: Lacey (Matt) Franzen of Crete, Neb., with their daughters Anna and Cora; Geoffrey (Jennifer) Beemer of Imperial, with their children Avery, Emerson and Grayson; Leann (Seth) Carruthers of St. Louis, with their children Marilla and Roger; Brian Thompson of St. Louis; Whitney (Troy) Soper of Ogallala, Neb., with their daughter Adler; Kyle Bottom of Hershey, Neb.; Angela Sanders (Jay Bell) of Littleton, Colo., with their son Charlie, and Angela’s son Damian; Jamie Schoenfelder of Belgrade, Mont.; Megan Schoenfelder of Eau Claire, Wis., with her daughter Miklyn; Eric (Lindsay) Moreland of Parker, Colo., with their children Hunter and Bennett; Blake (Darcy) Moreland of Imperial, with their daughter Raegan; Jes Kjar of Omaha, with her son Kolt; Jason (Jessica) German of Cozad, Neb., with their children Maddex and Miles. Lex was preceded in death by his stepson Jovic Gould; niece Amy Thompson; nephew Austin Sanders; and brother-in-law Mike Schoenfelder. Visitation will be held Friday afternoon, March 27, 2:00 P.M. - 6:00 P.M. at Liewer Funeral Home in Imperial. Graveside Services for Lex Thompson with( full military honors ) will be held Saturday afternoon, March 28, 2020, 2:00 P.M. at Mount Hope Cemetery, Imperial, NE A memorial has been suggested to the Thompson Family for a designation at a future date. Online condolences maybe left at liewerfuneralhome.com (PLEASE KEEP ALL CRONAVIRUS PROTOCOL IN MIND) LIEWER FUNERAL HOME ENTRUSTED WITH ARRANGEMENTS

Lex Thompson Lex Eugene Thompson was born at Burwell, Neb., on Jan. 16, during the blizzard of 1949, to Loyal Burton Thompson and Ina Faye (Daiss). The family then moved to Grant, Neb., where Lex attended elementary school at Rural District... View Obituary & Service Information

The family of Lex Thompson created this Life Tributes page to make it easy to share your memories.