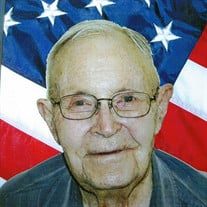 Lester Louis Greim April 3, 1922 – April 3, 2019 Lester passed peacefully in Lakewood, Colorado, at his Retirement home at 97 years of age. Lester was born at the family farm in Chase County, south of Imperial. He and wife Dolores (Zieigler) were the third generation of the Greim family to live on the farm homesteaded by Henry and Elizabeth Greim and later Leonard and Emma (Bauerle) Greim. He attended a Lutheran parochial elementary school in Champion Valley through the 8th grade and then to Chase County High School of which he left in 1942 to enlist in the Navy. He served during WWII at Pearl Harbor in Hawaii until 1946 as an electrician mate on naval ships and submarines. Lester was confirmed at the Immanuel Lutheran Church, Champion Valley in 1936. He was married in 1946 to Dolores Ziegler in St. Francis, Kansas, and farmed South of Imperial before moving with his family to his father’s farm. Lester is preceded in death by his wife, Delores in 2005 and by his parents, Leonard and Emma Greim and sister Iola Skewes. Lester is survived by his sisters; Elaine Davis of Las Vegas, Nevada, and Fauniel Kimberling, wife of the late, Vinton Kimberling, of Imperial. He is also survived by his sons, Lonnie (wife Karen) and Scott Greim, grandchildren Matt Greim and Christen (married to Matthew Bottoms) and great grandchildren Joseph and Deborah Bottoms. A Graveside Memorial Service will be held Friday afternoon, July 12, 2019, 1:00 P.M. at Mount Hope Cemetery, Imperial, with Pastor David Kahle of Zion Evangelical Lutheran Church officiating, Full Military Honors will be provided. The family requests that memorials be given to the Chase County Veterans Memorial Fund and sent to Liewer Funeral Home at 841 Court St. PO 304, Imperial, Ne. 69033. Online condolences maybe left at liewerfuneralhome.com LIEWER FUNERAL HOME ENTRUSTED WITH ARRANGEMENTS

The family of Lester L Greim created this Life Tributes page to make it easy to share your memories.