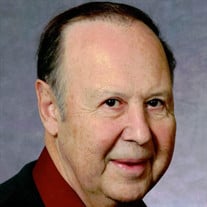 Les Smith Leslie Earl Smith was a husband, father, grandfather, and great grandfather. He was born October 17, 1938, to Leslie E. Smith Sr. and Gladys B. Smith in Imperial, NE. He died June 20, 2019. As a younger man, married at the age of 20, and with a family to support he hit the road selling sewing machines and vacuum cleaners in Wyoming, Colorado, and Nebraska. His wife, Sue, soon grew tired of this idea so as a natural salesman, he tried his hand at cars. While a car salesman in Denver, he convinced his boss that his family in Nebraska could buy whatever they like and told him just to dial Farmers and Merchants Bank and they would approve the money to purchase a new car he wanted to buy. Much to his shock and dismay when Eg, his grandfather-in-law, answered the phone and said "Not at this time," Les thought the farm must have gone under! Turns out the bank examiners had walked in the door at the same time and Eg had some things he needed to take care of. From selling cars, Les moved on to business machines and then was offered the option of selling his share of the farm or moving back to Imperial and becoming part of L.E.Smith and Sons, which is what he chose to do. He was involved in their farming operation until they sold in 1981. As such they brought sugar beet growing to Chase County and were Great Western Sugar's largest growers. After farming and still a salesman at heart, he earned his real estate and broker's license and opened LES REALTY with offices in Imperial, Grant, and Kimball. He sold to Colson Realty in 2003 due to health issues. Les was blessed with 3 children, Leslie E. Smith III, Melinda S. Gray (Kass), and Felicia K. Fair (Randy). He had 5 grandchildren, Kyle E. Gray (Lara), Karlee J. Grant (Andy), Alexander L. Gray (Emily), Lilith K. L. Fair, and Lisette K. Fair, and a great-granddaughter, Sloan K. Gray. He was preceded in death by his son, Leslie, and his parents, Les Sr. and Gladys. He is survived by his wife of 60 years, Sue, and brothers, Stan R. Smith and Gene A. Smith, brother-in-law, Jim Burke (Suellen), and sister-in-law, Kay Campbell (Denis), a niece and 4 nephews. Les loved games of all kinds, especially 31 with his close buddies, and Mah Jongg which he played on a weekly basis. He delighted in his dog, Andy, who fetched Sue any time he called her name with his very loud bark and greeted everyone who came to the door the same way so Les always knew when someone was there. Les was an avid fan of his grandchildren's activities and loved going to watch their games, concerts, and anything else they might be involved in. In the past few years he was very recognizable in his orange wheel chair. Les was a believer in supporting his community and church and served wherever he could throughout his life. He was a Past Worthy Grand Patron in the Order of Eastern Star and a member of the Masonic Lodge. Funeral services for Les were held June 25, 2019, in the Imperial Methodist Church with Pastor Dirk Weiss officiating. Burial was in Mt. Hope Cemetery. Memorials are suggested to The Imperial Community Foundation or the donor’s choice. Online condolences maybe left at liewerfuneralhome.com LIEWER FUNERAL HOME ENTRUSTED WITH ARRANGEMENTS

Les Smith Leslie Earl Smith was a husband, father, grandfather, and great grandfather. He was born October 17, 1938, to Leslie E. Smith Sr. and Gladys B. Smith in Imperial, NE. He died June 20, 2019. As a younger man, married at the age... View Obituary & Service Information

The family of Leslie E Smith created this Life Tributes page to make it easy to share your memories.