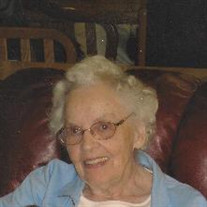 Leona Littlejohn Leona Loretta Littlejohn was one of five children born to Christopher and Lydia Buethe on September 29, 2018, on the family farm near Elk Creek, Nebraska. She was welcomed into God’s holy family in baptism and confirmation at Saint Peter’s Lutheran Church. Leona attended grade school at Pleasant Hill Country School and one year at Elk Creek High School. Due to the early death of her father, Leona moved to Lincoln at age 17 and became a housemaid to several families which helped support her family at home in Elk Creek. Leona was united in marriage to William G. Littlejohn on January 11, 1942 in Lincoln, Nebraska. William was serving in the United States Army during their early years of marriage, so while stateside, Leona worked at a hospital in California performing various jobs. After William’s discharge in 1945, they lived in Tecumseh, Nebraska where they made their home for many years. They were blessed with two children. In 1979 they moved to Wauneta, Nebraska, to be closer to their children and their families. In September 2011, Leona became a resident at Wauneta Care Nursing Home. Leona passed away on Friday, November 3, 2017 at the Chase County Community Hospital in Imperial, Nebraska at the age of 99 years. Leona lived an active life as a homemaker, tending a large garden, and being very active in her children’s activities. She was a cub scout den leader, a member of Lutheran Ladies Aid, and a VFW Auxiliary officer and member. Leona enjoyed crocheting and knitting, having crocheted an afghan for each of her grandchildren. Leona is survived by her two sons, Garret and wife Patti of Bradenton, Florida, and Leonard and wife Bernie of Chappell, Nebraska, 13 grandchildren, 17 great-grandchildren, one great-great grandchild, and a brother Chris Buethe. Preceding her in death were her husband William, one sister, (Fern Grove), and two brothers (Victor Buethe and Chet Buethe). Memorial Services will be held on Saturday, November 11, 2017, 11:00 a.m. (Mountain Time) at Redeemer Lutheran Church of Wauneta, NE, with Pastor David McCarthy officiating. Inurnment of cremains will be held at Fort McPherson National Cemetery, Maxwell, Nebraska on Friday, November 10, 2017. A memorial been established to the Redeemer Lutheran Church of Wauneta, NE Online condolences may be left at liewerfuneralhome.com LIEWER FUNERAL HOME OF WAUNETA ENTRUSTED WITH ARRANGEMENTS

Leona Littlejohn Leona Loretta Littlejohn was one of five children born to Christopher and Lydia Buethe on September 29, 2018, on the family farm near Elk Creek, Nebraska. She was welcomed into God&#8217;s holy family in baptism and confirmation... View Obituary & Service Information

The family of Leona L Littlejohn created this Life Tributes page to make it easy to share your memories.

Leona Loretta Littlejohn was one of five children...