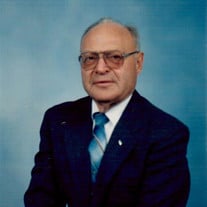 Lee Almer Porter Reverend Leo Porter of Wauneta, age 82, left his earthly home, surrounded by his loving wife and family, for his eternal home with his Lord and Savior, Jesus Christ. Leo was the second of a set of twins born to Wayne R. Porter and Gladys (Sherrah) Porter on May 25, 1934, in Hayes County, Nebraska. He was raised on the family farm North of Palisade, Graduated from Curtis Agricultural High School in 1953. Leo, after high school, joined the newly formed US Air Force and became a Crew Chief assigned to B-47 Bombers at Lincoln AFB, Nebraska. (During this assignment, he met the love of his life and married Onita R. Newman). In 1963, he was asked to change to a different aircraft, the C-130 Hercules. He accepted the new assignment and became an air crew member as Flight Engineer on the C-130 until his retirement in December of 1973. During this time, Leo logged over 5000 hours flight time, most of which were combat flying hours over Viet Nam. He also had the opportunity to visit 52 different countries around the world. He loved his time in the service. He spent many hours sharing his stories of travels and adventures with his family and friends over the years. He was awarded many medals for his exemplary service to his country including a Bronze Star, and The Air Medal with Oak Leaf Clusters (indicates repeat awards of the same medal). On November 26, 1955, he was united in marriage to the love of his life, Onita Rebecca Newman. To this union five daughters were born; Marvene, Christine, Lisa, Bonita, and Cindy. During their marriage, they traveled around the USA and Asia. (during an assignment to Okinawa). After his retirement from the US Air Force in 1973, they returned to the family farm near Palisade, Nebraska, and farmed with his father until 1980. Leo, already a licensed Minister, felt the Lord calling him back to the ministry, and moved to Ft. Worth, Texas, where he attended Southwestern Baptist Theological Seminary. Upon graduation in 1983, he pastored a church in Wray, Colorado, until 1987. He joined the Mission Service Crop Volunteer for the Southern Baptist Home Mission Board and was assigned to a church in Elk City, Idaho, until 1990. He was also a missionary in Panguitch, Utah, until returning to Nebraska, in 1995. Continuing his Mission Service Corp, as a church planter, he started the Frenchman Valley Baptist Church in Wauneta, Nebraska, in 1996 and stayed to pastor this church until his death. Leo loved working in his yard, gardening, fishing, hunting, and camping. He loved his Lord, his wife, his children, his grandchildren and his great-grandchildren. He enjoyed teaching them all how to fish, camp, and take care of their cars. We always called him a “Jack of All Trades”, because there seemed to be nothing he couldn’t fix and keep running (including “Old Blue”, a 1962 Ford pickup he revived in 1979 and is still running!) he was never one to sit around and do nothing. He retired from Harchelroad Motors in February of 2015, after working there for 19 years. Preceding him in death was his mother, Gladys Porter ,Father, Wayne Porter, Grandson, Andrew Roe, Granddaughter; Amanda (Roe) Douglas, and twin sister; Leota (Porter) Brown Survivors Include: Wife: Onita Porter of Wauneta, NE Daughters: Marvene Roe and husband, James, of Wauneta, NE Christine Lytle and husband, Terry, of Wauneta, NE Lisa Wolcott and husband, Kim, of Palisade, NE Bonita Lawler and husband, Don, of Wauneta, NE Cynthia Engel and husband, Robert, of Wauneta, NE 20 Grandchildren 22 Great-Grandchildren, soon to be 25 Sister: Sandra Warvi of Cheyenne, WY Many dear friends that called him Dad and Grandpa Funeral service will be held Saturday morning, August 20th, 2016, 2:00 P.M. (Central Time) at the Hamlet Union Church of Hamlet, Nebraska, with Rev. Doug White, Rev. Doug Lee and Rev. David McDonald officiating. Interment will follow at the Palisade Cemetery, Palisade, Nebraska. Visitation will be held Friday afternoon, August 19th, 2016, 2:00 P.M. – 6:00P.M.(Mountain Time) at the funeral home in Wauneta, NE Memorials have been established to the Cystic Fibrosis Foundation and the American Cancer Society. Online condolences maybe left at liewerfuneralhome.com LIEWER FUNERAL HOME OF WAUNETA IN CHARGE OF ARRANGEMENTS

Lee Almer Porter Reverend Leo Porter of Wauneta, age 82, left his earthly home, surrounded by his loving wife and family, for his eternal home with his Lord and Savior, Jesus Christ. Leo was the second of a set of twins born to Wayne R. Porter... View Obituary & Service Information

The family of Leo A Porter created this Life Tributes page to make it easy to share your memories.