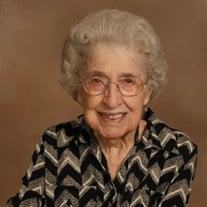 Lela Margaret Truitt Brandt was born April 20, 1921, in Perkins County, Nebraska, to Orvel Thayer Truitt and Florence Elizabeth Stockton Truitt. She grew up in Perkins County, graduating from Perkins County High School in Grant, Nebraska. She met her future husband Rudolph (Rudy) Dietrich Brandt who lived in neighboring Chase County, Nebraska. They were married on February 22, 1940, in Imperial, Nebraska, at Zion Lutheran Church by Pastor Paul W. Sellman. She was received as a member at the same church on April 11, 1941. Lela attended Nebraska State Teachers’ College in Kearney, Nebraska, and received her teaching certificate. Lela and Rudy’s marriage was blessed with the birth of a daughter, Aleta Gail in 1946 and a son, Douglas Lynn in 1952. They lived in Imperial in the early years of their marriage, then moved to the Kent Ranch in northwest Chase County and lived there from 1948 until 1963 when the ranch was sold. They lived in Imperial from then on. In addition to being a wife and mother, Lela taught school in several rural country schools, was a helpmate to Rudy on the ranch, worked at Sweeney Insurance and the local Co-op, and was the secretary at the Imperial Grade School until she retired. Lela enjoyed vegetable and flower gardening and had a yard full of beautiful flowers which she was still able to care for early this summer. She enjoyed baking and her family always looked forward to her pies and other baked goods. She loved sewing many of her own and her children’s clothes. Lela was an active and faithful member of Zion Lutheran Church enjoying the weekly Bible study group on Tuesdays and quilting with friends at the church every Thursday. She also served on the hospital auxiliary. Lela passed away early Thursday morning, September 29, 2016, at the Imperial Manor Nursing Home where she had been a resident for 12 hours. She had been in ill health for about a week previous to her death and was ready for her heavenly home. Lela is survived by her daughter, Aleta Gail Brandt Mills and spouse Boyd of Fuquay-Varina, N.C.; and son, Douglas Lynn Brandt and spouse Jean of Imperial, NE; four grandchildren, Davetta Mills Whitlock and Dietrich (Beth) Mills of North Carolina, Larissa Brandt Johnson (Rich) of Gretna, NE, and Heather Brandt Ladman (Jason) of Malcolm, NE; and seven great-grandchildren, Joseph Pate and Elle Whitlock of North Carolina, Nolan and Emerson Johnson of Gretna, NE, Mason Ladman of Pawnee City, NE, Addyson Hanson, and Clara Ladman of Malcolm, NE, as well as extended family and friends. Lela’s husband, Rudy, preceded her in death in February of 1999, just 20 days before their 60th wedding anniversary. Others preceding her in death were her parents, Orvel and Florence Truitt; brothers, Cleo, Glenn, Vernon and Orvel Jr.; and sisters, Verneta Enfield and Lois Alden. She was the last surviving member of her family from that generation. Funeral Services for Lela will be held Friday, October 7, 2016, 10:00 a.m. (MT), at Zion Lutheran Church, Imperial, Nebraska, with Pastor David Kahle officiating. A private immediate family only burial will follow at Mount Hope Cemetery, Imperial, Nebraska. Visitation will be held Thursday afternoon, October 6th, 2016, 2;00 P.M. – 6:00 P.M. at the funeral home in Imperial. In Lieu of flowers, a memorial has been established in Lela’s memory to the Zion Lutheran Church, Imperial Nebraska. Online condolences may be left at liewerfuneralhome.com LIEWER FUNERAL HOME ENTRUSTED WITH ARRANGEMENTS

The family of Lela Margaret Brandt created this Life Tributes page to make it easy to share your memories.