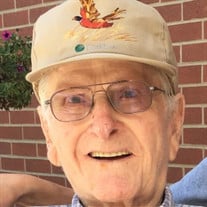 LeeRoy Weimer was born on June 1, 1931, being the 15th child of 16 children born to David and Katherine Weimer. David and Katherine were a German family that were immigrants from Russia and settled in the Fort Morgan / Greeley, CO area where LeeRoy was born and raised. God’s eternal salvation was bestowed by His grace to LeeRoy in infant baptism. He completed his earthly journey July 2, 2018. LeeRoy served in the military in active service in the Army from 1952 to 1954 as a construction equipment mechanic and also in the military reserve until 1960. He married Clairene Brunkhorst on May 1, 1955, at Redeemer Lutheran Church of Wauneta NE. To this union five children were born. LeeRoy and Clairene initially made their residence in Greeley, CO before settling in Hamlet, NE where he was a T.V. repairman. A farming and livestock operation was then established in the Hamlet area. LeeRoy thoroughly enjoyed the family farming and ranching operation. He had a love of nature taking time to enjoy all the simple miracles in God’s creation. He especially enjoyed fishing. He took great pride in his family and instilled integrity, respect and his faith in God to all of them. He was proceeded in death by his parents, David and Katherine Weimer; daughter, Carol Sue, and 14 siblings (David, Amelia, Karl, Jacob, Caroline, Millie, Gottfried, Henry, Helen, Leona, Lydia, Esther, Samuel, and Violet). Those who survive him include his wife of 63 years, Clairene; children Katherine and husband Stephen Winscot of Oxford, Lon Weimer of Hamlet, Monte and wife Tina Weimer of Pittsboro Indiana, Nancy and husband Hugh Anderson of Benkelman, eleven grandchildren Angela (Jordan) Clark, Amberly (Matt) Krickbaum, Andrew (Traci) Winscot, Katelyn (Nate) Redman, Allison (Jacob) Spencer, Jacob (Allie) Weimer, Ethan Weimer, Tara Abella, Connor Abella, Ben Anderson and Josh (Jordyn) Anderson; ten great grandchildren Claire, Emma, Isaiah, and Olivia Clark, Hannah and Charlotte Krickbaum, Audrey Redman, Ellie Spencer, and two great grandchildren due this fall, his sister Elsie and husband Graydon Duke, and many nieces, nephews, and friends. Because of God’s grace in Christ Jesus, it is well, it is well, it is well with his soul. Memorials may be given in his name to the Redeemer Lutheran Church of Wauneta NE. Funeral Services will be held Saturday morning, July 7th, 2018, 10:30 A.M. (Mountain Time) at the Redeemer Lutheran Church of Wauneta, Nebraska, with Pastor David McCarthy officiating. Inurnment will follow at the Riverside Cemetery, Wauneta. Online condolences may be left at liewerfuneralhome.com LIEWER FUNERAL HOME OF WAUNETA ENTRUSTED WITH ARRANGEMENTS

LeeRoy Weimer was born on June 1, 1931, being the 15th child of 16 children born to David and Katherine Weimer. David and Katherine were a German family that were immigrants from Russia and settled in the Fort Morgan / Greeley, CO area where... View Obituary & Service Information

The family of LeeRoy Weimer created this Life Tributes page to make it easy to share your memories.