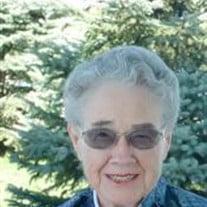 Lee Moreland Lucelia Ellen “Lee” Moreland was born December 29, 1925 to Earl Alexander Porter and Ellen Geraldine Daffer Porter. She graduated from high school in 1943 in Liberal, KS. She went on to attend Nurses Training at Mary Lanning School of Nursing at St. Francis Hospital in Grand Island, NE. Following graduation Lee and her best friend Alyce (Shorty)Erthum came to Imperial to work at Chase County Community Hospital. Shortly after arriving, they met two young men. Lee said, “I’ll take the tall one.” Shorty said, “I’ll take the short one.” Soon both couples were married and lived happily ever after in Chase County, NE. During her nursing career, Lee was the first Director of Nursing at the Imperial Manor during a simpler time of nursing when she taught her aides to be aides and had time to be a nurse. Lee used her nursing skills in the community over the years, taking blood pressures at the Imperial Manor for many years, organizing the Lion’s Club Health Care Bus which came to Imperial at fair time. Lee coordinated staffing and times and worked many hours on the bus herself. Lee, Dee Yaw and Phyllis Haberman were instrumental in founding the “I Can Cope” in 1985 for cancer survivors. She was Education Chair for the American Cancer Society in 1985 and worked the Nine Health Fair in Imperial in 1993. Lee was District 8 delegate for the state board of nursing for a number of years receiving many accolades during this time. Lee was very politically active in the Republican Party for many years, being a delegate to the county convention the first time in 1956 and sitting on the County Election Board many times. Lee was very involved in Congresswoman’s, Virginia Smith’s, campaign being invited to many political functions and organizing many on her behalf. Other volunteer activities in the area included being an EMT from 1975 to 1984. She was a 4-H leader from 1964 to 1967. She sat on the library board starting in 1994 and enjoyed many years of service there. She was also very active with the Chase County Historical Society and served for many years. Gene and Lee moved to Imperial from the farm in 1980. In her retirement, Lee began water color painting taking a class at McCook Community College and later taking weekly classes with Mucie in Holbrook, enjoying chicken sandwiches at the local café and great camaraderie with the other artists. She exhibited her paintings in many art shows in the surrounding area. Lee’s daughters Pat and Kerry have turned many of her paintings into notecards, one which is featured on the front of her memorium. Lee took up golf in her retirement enjoying many years of league golf and spent much time golfing with her good friend Dorothy Miller. One of her delights was to teach her grandson, Eric, to golf and she enjoyed following his successful career through high school. Lee enjoyed following her grandchildren’s activities wherever that might be, including her granddaughter Jessica’s softball career through high school and college. And Mike and Jane’s horse racing career was also a big part of her life. After her retirement Lee also enjoyed traveling abroad with her husband Gene. They traveled to many different countries and enjoyed taking in the new sites and exciting new cultures. Lee passed away Thursday morning, May 23, 2013 at the Imperial Manor Nursing Home. She was 87 years of age. PROCEEDED IN DEATH BY: Earl Alexander Porter, Father, Ellen Geraldine Porter, Mother, and Jovic Ray Gould, Grandson. SURVIVED BY: Husband: Gene Moreland Children: Kathy Loring (Butch), Jodi Thomspon (Lex), Pat Schoenfelder (Mike), Mike Moreland (Jane), all of Imperial, NE and Kerry German (Britt) of Cozad, NE. Grandchildren: Angie Sanders, Jared Thompson, Jamie Schoenfelder, Megan Schoenfelder, Eric Moreland , Blake Moreland, Jason German and Jessica Kjar. Great Grandchildren: Austin Sanders, Damien Adkins, Charles David Bell, Bryarrose Thompson, Miklyn Schoenfelder, Hunter Moreland, Maddox German, Miles German Brother: Ed Porter (Dorothy) of Sioux City Iowa. Visitation was held on Tuesday, May 28th 2013, at Liewer Funeral Home from 2-6:00pm. Family greeted from 4-6:00pm. Funeral Services were held on Wednesday May 29th, 2013 at 10:30 am at Crossroads Wesleyan Church in Imperial, NE. with Pastor Phil Harris officiating. Interment followed at Mount Hope Cemetery, Imperial, NE. A memorial has been established to the Imperial Lions Club. Online condolences can be left at liewerfuneralhome.com LIEWER FUNERAL HOME IS IN CHARGE OF ARRANGEMENTS

The family of Lee Ellen Moreland created this Life Tributes page to make it easy to share your memories.