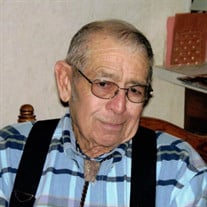 Lee Williams, 81, of Parks, Nebraska, passed away on May 9, 2021, at his home with family by his side. He was born in Imperial, Nebraska, on February 1, 1940, to Kenneth William and Mary Louise (Bankson) Williams. Larry graduated from Benkelman High School in the class of 1958. At the age of eighteen he took over the family farm after his dad’s passing. On July 22, 1973, he married Linda Kay Childers of Bird City, Kansas. To this union one daughter Courtney Sue was born. In 1978 Larry and Linda added on to a one room house, doing all of the work themselves where he lived until his death. Larry was District # 3 County Commissioner for twelve years. He served on the school board, was a 50-year member of the Grand Masons, a Mystic Shriner and a proud supporter of FFA and NRA. Larry was also a trained weather spotter for the National Weather Service out of Goodland, KS. Larry was preceded in death by his parents, wife Linda in 2009, son Mark (Williams) Hill and brother Kenny. Survivors include: Daughter: Courtney Williams and husband Brad of McCook, NE. Grandchildren: Lexis Meissner and husband Keenan of McCook, NE, Krayten, Korbin and Sierra Williams of McCook, NE and Grace Mellinger (daughter of the late Mark Williams) of Aurora, CO. Funeral Services for Larry will be held on Saturday, May 22, 2021, 2:00 PM (MT), at the Benkelman Memorial Chapel in Benkelman, Nebraska, with Jesse Mallett officiating. Inurnment will follow at the Benkelman Cemetery, Benkelman, Nebraska. A memorial has been suggested to the Williams family for a future designation in Larry’s memory. On line condolences may be left at liewerfuneralhome.com BENKELMAN MEMORIAL CHAPEL ENTRUSTED WITH ARRANGEMENTS

Lee Williams, 81, of Parks, Nebraska, passed away on May 9, 2021, at his home with family by his side. He was born in Imperial, Nebraska, on February 1, 1940, to Kenneth William and Mary Louise (Bankson) Williams. Larry graduated from Benkelman... View Obituary & Service Information

The family of Larry L Williams created this Life Tributes page to make it easy to share your memories.