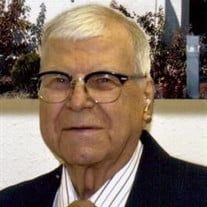 Kermit Bernard Karns 1917-2014 Kermit Bernard Karns was born Jan. 17, 1917, in Chamberlain, S. D. His parents were Thomas Karns and Ida Elizabeth Bury Karns. Kermit had one older brother, Kenneth Lester Karns. Kermit moved with his parents to several different locations as he was growing up. They operated a dairy farm near Parma, Mich., in 1919. In 1923 they moved to a wheat farm near Macleod, Alberta, Canada. They didn’t stay there long and moved back to a dairy farm near Stayton, Ore. In 1926 Thomas, wife Ida and Kermit moved to a farm about 50 miles north of Miles City, Mont. Kermit attended the Crow Rock School which was four miles from the farm. He rode a horse to school and later drove his dad’s Model A Ford pickup. He took the eighth grade examination and got second highest in the county. He became interested in electricity and took a Cooke electrical correspondence course. In the process of learning about electricity he began to rewind burned out automobile electric generator armatures—and thus his life-long interest and career in electrical engineering was begun. In 1935 he joined the Civilian Conservation Corps (CCC) in the Missoula, Mont., area. He worked with the Forest Service Company. He later went back to Miles City, Mont., and worked as a mechanic for the Love (Ford) Motor Company. He joined the Eagles Club and went to their dances. This is where he met Lottie Wolf from Danzig, N. D. They were married Oct. 1, 1937, at the 4-Square Church in Miles City. Shortly after they were married, Kermit got his first Federal Government job and reported to work at the Granger Airway Station in Wyoming to take weather observations and other teletype traffic. While living there, daughter Celia Joyce was born. Working for the Federal Government brought several moves including a move to Sidney, Neb., following Pearl Harbor. While the family lived at Sidney, two sons were born; Richard Thomas (Dick) and John Russell. Following World War II Kermit changed to an electronic maintenance position with the now Federal Aviation Administration (FAA) and moved to Hayes Center, Neb., and then Imperial, Neb., in 1947. In 1955 Kermit received an electronic engineer position in Kansas City, Mo., and the family moved once more. Kermit and Lottie remained in Kansas City until 1999. He continued working for the FAA until his retirement in January of 1973. Kermit acquired some genealogy forms, which were new to him. He ordered a quantity of them and used them whenever he took trips to visit relatives. This started him on the everlasting pursuit of genealogy. It became an important part of Kermit’s life. He helped establish and was the first president of the Missouri State Genealogy Society. In 1963 Kermit started enumerating cemeteries. He listed all of Chase County, Neb., cemeteries from 1963 to 2006 and also photographed many area cemeteries. Kermit was always eager to help others trace their genealogy. The computer became a wonderful tool during his lifetime. The Karns family enjoyed many vacations to visit relatives and see national parks. Kermit enjoyed camping along the way. They went for one month every other year during the summer. In later years Kermit and Lottie traveled to Hawaii, Florida, California and many other places, attending reunions and many special events along the way. Kermit was a 50 year member of the United Methodist Church, combining the First Church of Imperial and the North Cross of Kansas City. He and Lottie celebrated their 50th wedding anniversary on Oct. 1, 1987. Kermit received his 50 year membership pin from the Masons in 2005. He was a member of many organizations and institutes, a few of which are American Institute of Electrical Engineers, Heart of America Genealogy Society, Missouri State Genealogical Association Founding President, North Dakota Historical Society of Germans from Russia, a life member of the Chase County Historical Society and a Legacy member of the Nebraska Community Foundation. He moved back from Kansas City to Imperial in 1999 to be close to wife Lottie who was at the Imperial Manor. In 2010 he moved into Parkview Assisted Living. He enjoyed good health most of his 97 years and also enjoyed all his friends at Parkview. Kermit passed away on Sunday, Nov. 30, 2014 at the Imperial Manor with his family close to him. Kermit was preceded in death by his parents, brother Kenneth Karns, wife Lottie Karns, infant son in 1938, great-grandson Austin Spady in 1994, daughter-in-law Terri Karns and son-in-law Dennis Spady. Surviving are his daughter Celia Spady of Champion, Neb.; sons Richard (Dick) Karns and wife Loretta of Kearney, Mo., and John Karns of Liberty, Mo. Surviving grandchildren are Cynthia Dahlkoetter and husband Dennis of Grant, Neb., Mark Spady and wife Michelle of Imperial, Neb., Blaine Spady and wife Robin of Lincoln, Neb., Chad Karns and wife Heather of Parkville, Mo., Shannon Covarrubias and husband Emilo of Liberty, Mo. Great-grandchildren are Leah Dahlkoetter of Grand Island, Neb., Danielle Dahlkoetter of Sioux City, Iowa, Alec Spady and wife Nichole of Imperial, Neb., Dakota and Jacob (Jake) Karns of Parkville, Mo., Paige, Nolan, Sophie, Lucy, Olivia and Quinn Spady of Imperial, Neb., Eleanor and Silas Spady of Lincoln, Neb., Stephanie Craig and husband Cody of Liberty, Mo., Ashley Covarrubias of Liberty, Mo., and three great-great-grandchildren, Jordan, Makina and Noah Craig of Liberty, Mo. Also surviving is sister-in-law Delores Schuchard of Bismarck, N. D. He will be missed by his family and many friends. Memorials may be given to Chase County Historical Society and Rainbow Promise Preschool. Memorial Services for Kermit Karns will be held Thursday morning, December 4th, 2014, 10:00 A.M. (MT) at the United Methodist Church of Imperial, with Pastor Valera Heydenberk officiating. Inurnment will follow at Mount Hope Cemetery, Imperial. No Visitation, Kermit chose cremation. Memorials have been established to the Rainbow Promise Preschool of Imperial, and the Chase County Historical Society. Online condolences can be left at liewerfuneralhome.com LIEWER FUNERALHOME ENTRUSTED WITH ARRANGEMENTS

The family of Kermit Karns created this Life Tributes page to make it easy to share your memories.