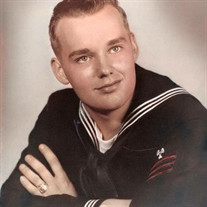 Kenneth Neil Vanderford was born on February 12, 1939 to Charlie and Elsie Vanderford and raised on a farm 5 miles south of Haigler, Nebraska with one brother Norvin. Kenneth passed away August 29, 2019 in the family home at the age of 80. Kenneth attended grade school in a country school near the farm, West 10th School. He then went on to high school in Haigler, Nebraska and graduated in 1957. Kenneth joined the Navy December 1957 and went to boot camp in San Diego, California then on to machinist mate school in Great Lakes, Illinois. After training he served aboard the USS Intrepid. During his tour they sailed to the North Atlantic Ocean, the Mediterranean Sea three times, the Caribbean several times and visited many foreign countries. He was discharged in December of 1961. Kenneth married Ruth Ann DeWitt of Eckley, Colorado on January 22, 1963. They had three boys Tim, Dan and Scott. He went to work for the City of Benkelman in July of 1969 and worked there until he fully retired in 2018. Kenneth enjoyed fishing and hunting and cherished his many Master Angler Awards. He had 37 in all. In his spare time Kenneth collected arrowheads, artifacts, ammunition collecting, pre-historic bones, rocks, foreign coins, bills and some US currency and coins. Kenneth was preceded in death by his parents and brother Norvin. Kenneth is survived by his wife Ruth of the family home in Benkelman. Sons Tim (Wendi) of Benkelman, Dan (Carla) of Seale, Alabama, Scott (Melisa) of Benkelman and six grandchildren. Marissa (Brandon), Kindra (Ted) all of St. Francis, Kansas, Aaron & Isaac of Seale Alabama, Tammi (Javier) of Benkelman, Nebraska, Eric of Altus A.F.B., Oklahoma. First great-grandson due in December. Private family services will be held at a later date. No viewing or visitation; Ken chose cremation. A memorial has been established to the Vanderford Family for future designation. Online condolences may be left at liewerfuneralhome.com BENKELMAN MEMORIAL CHAPEL IS ENTRUSTED WITH ARANGEMENTS

Kenneth Neil Vanderford was born on February 12, 1939 to Charlie and Elsie Vanderford and raised on a farm 5 miles south of Haigler, Nebraska with one brother Norvin. Kenneth passed away August 29, 2019 in the family home at the age of 80. Kenneth... View Obituary & Service Information

The family of Kenneth Vanderford created this Life Tributes page to make it easy to share your memories.

Kenneth Neil Vanderford was born on February 12, 1939 to Charlie...