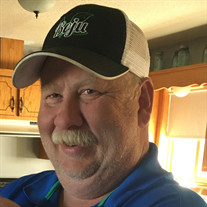 Kenneth “Kenny” Lawrence Johnson, a longtime resident of Hayes Center passed away early Wednesday morning, September 19, 2018 at Great Plains Health Service in North Platte after a fierce battle with cancer. He was 55 years young. Ken is survived by his children, Ryan (Melinda) Johnson of Hayes Center, NE and Erica (Gregg) Vork of Pine City, MN; his grandchildren, Abbigail (Ryan) and Laken (Erica); his sister Mary (Tom) Nielsen of Gordon, NE; his brother Jim (Lesa) Johnson of Hayes Center, NE; nieces, Tammi, Crystal, Alisha, and Jenny; nephews, Clint, Blaine, Justin, and Tristan; and several great nieces and nephews. Ken is preceded in death by his parents, Earl and Ruth Johnson of Hayes Center, NE and nephews:Kyle and Robert Johnson. Ken was born on March 29, 1963 to Earl Johnson and Ruth Jeffers in McCook, NE. While in high school, Ken and friends started the rock band “JAKAL”. After graduating from Hayes Center high school in 1981, he left for college in Rapid City, SD and graduated from National College of Business in 1983. He met the mother of his children during his time in college and on September 14, 1985 and February 17, 1989 respectively, he welcomed his two children, who were considered by him to be his greatest accomplishments. Ken moved back to Hayes Center, NE in 2010 and started working at the Coppermill in McCook, NE. Ken was an integral part of keeping the business flourishing and loved concocting new drinks for his customers and friends to try. In all of his endeavors, most people he met became friends, while others became part of his family. Ken also made it his mission to restore the Hayes County Golf Course to its full potential. He worked tirelessly days, nights, and weekends, raising funds and utilizing them to help the course come to life. He loved bringing the community together for tournaments, benefits, and other events at the golf course year round. He also joined the Hayes County Volunteer Fire Department. He somehow found time in his already overbooked daily schedule to help the surrounding communities stay safe from fires and emergency calls that arose. Those that knew Ken in Nebraska knew him as Kenny, Big Kenny, or Cayenne Kenny (he also had a small dried pepper spice business that was a local favorite). Ken was a devoted father and grandfather. If you knew Ken, you knew his children and grandchildren, even if you had never met them. There was no one more proud of their accomplishments than him. His whole face would light up when talking about them. A day wouldn’t go by that he would mention them to someone, whether a friend, neighbor, coworker, or patron. He will be eternally missed by family, friends, and all who knew him. A Rosary will be recited for Kenny on Sunday evening, September 23rd, 2018 at 6:00 p.m. (MT) at the funeral home in Wauneta with Father Gary Brethour leading. A memorial service will be held at 2:00 P.M. (CT), Monday, September, 24th, 2018 at the Hayes Center Schools Gymnasium with Rev. Matt Walker officiating. Inurnment will follow in the Hayes Center Cemetery, Hayes Center, Nebraska. No visitation; Kenny chose cremation. A memorial has been established in Kenny's Name. Online condolences may be left at liewerfuneralhome.com LIEWER FUNERAL HOME IS ENTRUSTED WITH ARRANGEMENTS

The family of Kenneth "Kenny" Johnson created this Life Tributes page to make it easy to share your memories.