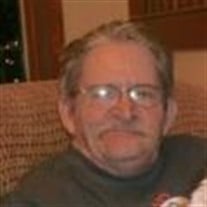 Kenneth C. Hummel of Cozad passed away Wednesday, August 28, 2019 at Central City Care Center at the age of 79. Kenny was born in Wauneta, Nebraska on November 19, 1939 to Robert and Gladys (Steckman) Hummel. He attended Wauneta Public Schools and later, as a teenager, Omaha School for the Deaf. Kenny spent his childhood tagging along after his older brothers, Jack and Richard, loved fishing and his cocker spaniel, Cindy and her puppy, Pat. After the death of his brother, Jack, Kenny returned to Wauneta and resided with his parents, Bob and Gladys. He worked for his dad at the Co-op Grocery Store stocking shelves, pricing, and sacking and carrying out groceries. He later worked at Harchelroad Motors detailing cars. He loved working, visiting with people, and old westerns. He faithfully attended St. John’s Lutheran Church and helped usher. After the death of his parents, he lived on his own for the first time. Thanks to his wonderful neighbor, Debra, he was able to enjoy this new independent life. Debbie worked teaching him to cook, clean, garden, can, and even drive. She was such a blessing in his life. He “adopted” his beloved cats, Tiger and Jessie, at this time. After an illness, he left Wauneta, cats in tow, and moved to Cozad where he quickly made new friends and continued to enjoy an independent life. Kenny loved going to the Grand Generation Center and following the activities of his great-nephews, great-niece and their friends. He attended St. Christopher’s Episcopal Church and buzzed around town on his scooter. Recently, because of health issues, Kenny moved into Emerald Nursing and Rehab in Cozad and later to Central City Care Center where the passed away on August 28th. He was blessed with many caring friends, loved his family, was steadfast in his faith and lived life to the fullest. He was preceded in death by his parents, Robert and Gladys Hummel, brother John (Jack) Hummel, sister-in-law, Jeralyn (Novacek) Hummel Bauman, great-nephews Logan Bauman and Kaleb Fanning. Kenny is survived by his brother and sister-in-law, Richard and Helen of Arkansas; nieces Mindy (Marcus) Young of Cozad and Julie Hummel of Arkansas; nephews John (Mary) Hummel of California and Andy (Karla) Bauman of Colorado; great-nieces Ashley Hummel of California, Alyson Young of Cozad, and Alyse Bauman of Arizona; great-nephews Myles Hummel of Oregon, Dreu (Brynn) Young of Cozad and Conor Young of Lincoln; great-great nephew, Maddux Young of Cozad; great-great nieces, Keisha Fanning of Arkansas and Eastyn Green of Cozad. He is also survived by beloved extended family, many great “framily” members and wonderful friends. Memorials are suggested to Central Plains Home Health & Hospice, Cozad Grand Generation Center or Cozad Housing Authority. Services were held Tuesday, September 3, 2019 at 2:00 p.m. (CT) at the Berryman Funeral Home Chapel in Cozad, Nebraska, with Harvey Pierce officiating. Cremation followed. Visitation was held Tuesday, September 3, 2019 prior to the service from noon until 2:00 p.m. Berryman Funeral Home was in charge of arrangements in Cozad. Local Graveside services will be held Saturday morning, October 5,2019, 10:00 A.M. (MOUNTAIN TIME) at Riverside Cemetery, Wauneta, NE, with Rev. Harvey Pierce officiating. On line condolences may be left at liewerfuneralhome.com LIEWER FUNERAL HOME OF WAUNETA ENTRUSTED WITH LOCAL ARRANGEMENTS

The family of Kenneth C Hummel created this Life Tributes page to make it easy to share your memories.