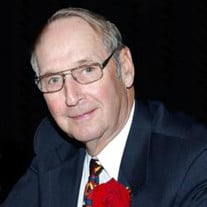 BENKELMAN, Nebraska – Kenneth Allen Gardner was born to Richard and Mary (Weigel) Gardner on September 5, 1932, in rural Max, Nebraska. He passed away on Thursday (Sept. 18, 2014), at Eastmont Care Center in Lincoln, Nebraska. Kenny attended school in the Max community graduating from Max High School in 1950. As a senior Kenny qualified for the state track meet in Lincoln. After graduating high school Kenny began his lifelong occupation of farming/ranching. In January of 1953 Kenny was inducted into the United States Army. Kenny was his way to Korea when the Korean War cease-fire was announced. Kenny served in Korea rising to the rank of Sergeant and was discharged from active duty in August of 1954. Kenny was a proud member of the American Legion and the Veterans of Foreign Wars. In June of 1953, he married Freedia Stamm in Benkelman, Nebraska. They had and two sons who died at birth and later they adopted two children: Allen Reed and Rita Annette. In August of 1977, he married Phyllis McGrath in Max, Nebraska, where they spent the next 33 years working alongside each other in their farming and ranching operation. As a cattle rancher, Kenny was a strong proponent of the cattle industry and was actively involved in both the National Cattlemen's Beef Association and the Nebraska Cattlemen's Association. Kenny was a strong advocate for the community by serving on the initial board of trustees for the Dundy County hospital. He also served on the Sarah A Hester home Board, the Max School Board, the Benkelman Cemetery Board and the Dundy County ASCS Committee. Kenny also served as a Dundy County Commissioner for over 8 years. Kenny was an actively committed Mason and Shriner and was a member of the Elks club in McCook for many years. Kenny was a firm believer in his savior, Jesus Christ. He was a life long member of the Max United Methodist Church, which his Grandfather was a charter member. Kenny devoted substantial time and efforts in keeping the church alive and thus served as president of the Church board for many years. His parents, his loving wife Phyllis and two infant sons preceded him in death. He is survived by Son Allen Gardner and wife, Cindy of Cario, Nebraska, Daughter Rita Saltzman and husband, Ronnie of Emerson, Nebraska; Step-sons, John "Bob" McGrath of Alexandria, Virginia and Jeffrey A. McGrath of Moorpark, California; 12 grandchildren, Justin McGrath and wife, Mindy, Rebecca Erickson and husband, Josh and Loretta McGrath, all of Bennington, Nebraska, Sarah McGrath of Lincoln, Nebraska, Madeleine, Spencer, Tanner and Georgia Burnette-McGrath, all of Moorpark, California, Natashia Houfek and husband, Hans of Emerson, Nebraska, Litton Stute and wife Tiffany of Benkelman, Nebraska, and Edward Gardner of Cario, Nebraska, 13 Great-grandchildren; brother, Dwayne and wife Laurie Gardner of Columbus, Ohio; and two sisters Donna Pursley of Colorado Springs, Colorado and Gweneth and husband Gary Ritchie of Lincoln and many other loving family and friends. Visitation will be held Monday afternoon Sept 22, 2014, 2:00 P.M. – 6:00 P.M. (MT) at the United Methodist Church of Benkelman. Funeral services are Tuesday, 10:30 a.m. MST, at the United Methodist Church in Benkelman with Rev. Sheila Taylor officiating. Interment will follow services at the Benkelman Cemetery. Committal with Military honors and Mason rights. It is suggested that memorials be made in his name to the Dundy County Hospital Foundation or the Max Community Center. Online condolences can be left at liewerfuneralhome.com Benkelman Memorial Chapel is entrusted with arrangements.

The family of Kenneth A. Gardner created this Life Tributes page to make it easy to share your memories.