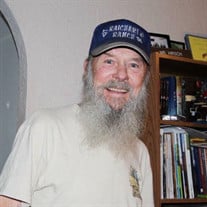 Kenneth Leroy Criger was born to George and Edna (Ferguson) Criger on August 31, 1944 in Benkelman, Nebraska. He married Marilyn Johnson on May 14, 1966 in Coeur d’Alene, Idaho; a short time after their union he was inducted into the United States Army where he served from 1968 to 1970. Kenneth and Marilyn traveled and lived in Parks, Nebraska, Yuma, Colroado, Benkelman, Nebraska, Wyoming and Montana. In 1971 they made their final move; they put roots down in Stratton, Nebraska and lived there until the time of Kenny’s passing. Kenneth was employed by the Raichart Ranch for more than 30 years. When not working or spending time with family and friends, he was most at home in the outdoors. He loved to fish and hunt and shared that passion with many friends and family members. Kenneth Criger passed away Saturday morning, September 23, 2017 at Community Hospital in McCook. He was 73 years of age. He was preceded in death by his parents, brothers, Dale and Doyle and a sister-in-law, Arlene Criger. Survivors include: Wife, Marilyn Criger of Stratton, Nebraska Son, Michael Shane Criger and wife, Barb of Laramie, Wyoming Daughter, Kala Bose and husband, David of Oberlin, Kansas Daughter, Tre Webb and husband, Troy of Colby, Kansas Daughter, Teia Salcido and husband, Rito of Colby, Kansas Grandchildren: Nicole (Cody) Fleshman, Dylan Criger, Danyel, Jordan (Mishaela), and Jaydan (Natasha) Baker, Nakita (Joe) Hirsch, Darian (Ace) Manning, Simon, Adrian, and Julia Salcido, and step-grandchildren: Jeremy and Brandon Webb and Brandon Robbs and Roy (Nichole) Robbs. 4 great-granddaughters and 5 great-grandsons Sister, Ila Jean Lewis and husband, Leonard of Missoula, Montana Brother, Delbert Criger of Phoenix, Arizona Brother, Charles Criger and wife, Dodie of Westerville, Ohio Sister, Cindy Preston and husband, Jason of Benkelman, Nebraska Brother-in-law, Bobby Johnson of Darby, Montana Graveside services will be at 4:00 P.M. (CT), Saturday, September 30, 2017 at Rose Hill Cemetery in Stratton, Nebraska with Pastor Wayne Vogel officiating. Visitation will be Saturday morning, September 30, 2017 from 10:00 A.M. – 12:00 P.M. (CT) at the Church of Christ in Stratton, Nebraska. A memorial has been established in Kenneth’s memory. Online condolences may be left at liewerfhuneralhome.com BENKELMAN MEMORIAL CHAPEL IS ENTRUSTED WITH ARRANGEMENTS

Kenneth Leroy Criger was born to George and Edna (Ferguson) Criger on August 31, 1944 in Benkelman, Nebraska. He married Marilyn Johnson on May 14, 1966 in Coeur d&#8217;Alene, Idaho; a short time after their union he was inducted into the... View Obituary & Service Information

The family of Kenneth Leroy Criger created this Life Tributes page to make it easy to share your memories.