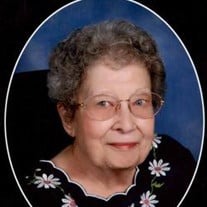 Kathleen “Katie” Langenfeld Kathleen Emma Langenfeld was born to Joseph and Deloris (Egan) Assmann on May 12, 1932 in Earling, Iowa. She attended school in Earling and graduated from St. Joseph High School in 1950 and went on to receive her Nurse’s Pin from Mercy Hospital in 1953. Kathleen was united in marriage to Mello John Langenfeld on October 17, 1953 in Earling. The couple would live in Council Bluffs, Iowa until 1969 when they moved to Imperial. During her life, Kathleen worked as a Mercy West Emergency Room nurse, as a private duty nurse and as a nurse at Chase County Community Hospital in Imperial. She was also the Director of Nursing at the Imperial Manor Nursing Home in Imperial. Kathleen was very active in her community, joining as many groups as there are days in the week. She was a member of St. Patrick’s Catholic Church and Altar Society, served on the Imperial Library Board, the Eagles Auxiliary, Rotary, Lion’s Club, was president of the St. Peter’s Parent Teacher Association and a member of the Canadian Club. In addition to her community service, she had many hobbies and interests. She was a lifelong-nurse, helping people maintain their health by giving shots to family and friends and providing monthly blood pressure checks at the Senior Center. She enjoyed knitting, she knitted her children complete wardrobes, played bridge, getting her hair done every week, traveling and visiting family members that lived near casinos and completing crossword puzzles. Katie Langenfeld passed away Sunday evening February 8, 2015 at the Imperial Manor Nursing Home. She was 82 years of age. She was preceded in death by her husband and parents; son, Mello John Langenfeld; granddaughter, Raechel Langenfeld; brothers, Bob and Art Assmann; sisters, Genieve Schwery and Helen Stolz; and most of her friends. Survivors include: Children: Connie and husband, Jeff Pribbeno of Imperial; Bill of Cool, CA; Gary of Anthem, AZ; Ruth and husband Dean Eechaute of Warrenton, MO; Mike of Cool, CA; and John and wife, Cyndi of Aurora, CO 16 Grandchildren 3 Great-grandchildren, and was anxiously awaiting the birth of her fourth great-grandchild. Brother, Bernard Assmann and wife, Rene of Dunlap, IA Sisters-in-law, Marie Graeve of Earling, IA; Delores Jacoby of Waterloo, IA and Ann Langenfeld of Onawa, IA Brothers-in-law, Bob Langenfeld and wife, Carol of Red Oak, IA, Melvin Schechinger of Manilla, Ia and Greg Schwery and wife, Linda of Houston, TX. Life Long Friends, Don and Clarice Buman of Harlan, IA and Punch and Hattie Gallup of Council Bluffs, IA. A Rosary was recited at 7:00 P.M. (MT), Thursday Evening, February 12, 2015 at St. Patrick’s Catholic Church in Imperial, with a Funeral Mass following Friday morning February 13, 2015 at 10:30 A.M. (MT) also at St. Patrick’s Catholic Church with Father Bernard Lorenz officiating. Interment followed at Mount Hope Cemetery in Imperial. Visitation was held Thursday afternoon February 12, 2015 from 3-6 P.M. (MT) at the funeral home in Imperial. A memorial has been established to the Imperial Community Foundation Fund. Online condolences can be left at liewerfuneralhome.com LIEWER FUNERAL HOME ENTRUSTED WITH ARRANGEMENTS

Kathleen &#8220;Katie&#8221; Langenfeld Kathleen Emma Langenfeld was born to Joseph and Deloris (Egan) Assmann on May 12, 1932 in Earling, Iowa. She attended school in Earling and graduated from St. Joseph High School in 1950 and went... View Obituary & Service Information

The family of Kathleen Langenfeld created this Life Tributes page to make it easy to share your memories.