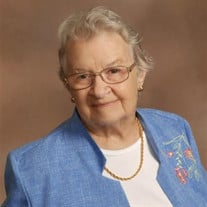 Joy Smith Joy LaRay (Einspahr) Smith was born on April 16, 1932, the oldest of 3 daughters born to Walter G. and Evelyn M. (Barraclough) Einspahr in Imperial, Nebraska, where she lived her entire life. Joy was baptized at Zion Lutheran Church on May 8, 1932 and confirmed at Zion on August 14, 1971. Joy attended Imperial Grade School and graduated from Chase County High School in May, 1950. Joy married Robert (Bob) Molzahn on May 23, 1953 at Zion Lutheran Church and to this union a son, Michael (Mike) Robert Molzahn was born on March 29, 1954. On August 14, 1971 Joy married Harlan Smith. Upon high school graduation, Joy became employed by the Brethower “Red and White Grocery” Store, (now Hill’s Family Foods) as a clerk and cashier before obtaining employment with the 1st National Bank (now Adams Bank and Trust) where she worked for 40 years before retiring February 24, 1995. When first employed with the bank she worked on a 100-key posting machine, (all checks had to be sorted and alphabetized by hand at that time), advancing to Vice President of Operations and Personnel upon her retirement. While affiliated with the banking business, Joy developed deep ties with her many peers both in the local organization and with Financial Women International, a national association of bank women. She was a charter member of the Southwest Nebraska chapter of that organization and also a past president. Joy was devoted to various public services, volunteering at the local Food Pantry for many years, along with being the secretary/treasurer of the Imperial Golf Club many years. Joy loved to sing and was a member of Zion Lutheran Church Choir. She was an avid golfer and bowler with hobbies of reading and traveling. Her favorite travel location was in the mountain area at Dillon Lake in Dillon, Colorado where she and her sister traveled many times, along with 2 Caribbean cruises and a trip to Germany. Joy passed away Thursday morning, June 22, 2017, at the Chase County Community Hospital, Imperial. She was 85 years of age. Joy was preceded in death by her parents, Walter and Evelyn Einspahr, her husband Harlan Smith, sister Rita Ackerman, step-son Steve Smith and brother-in-law Kenneth Rider, step-grandson Wade Smith, and step-daughter-in-law Sandra (Browning) Smith. Survivors Include: Son: Michael R. Molzahn and wife, Diana, of Trenton, NE Step-Daughter: Teri Spady and husband, Lennie, of Imperial, NE Step-Sons: Mike Smith and wife, Ann, of Imperial, NE Dick Smith and wife, Susie, of Omaha, NE Step-Daughter-in-law: Peggy Smith of Imperial, NE 14 Step-Grandchildren 21 Step-great-grandchildren Sister: Marcia Rider of Imperial, NE Brother-in-law: Harvey Ackerman of McCook, NE Numerous nieces, nephews and cousins. Funeral Services for Joy Smith will be held Monday morning, June 26th, 2017, 10:30 A.M. at the Zion Lutheran Church of Imperial, with Pastor David Kahle officiating. Interment will follow at Mount Hope Cemetery, Imperial, NE. The family has requested private family visitation only. A memorial has been established in Joy’s memory with the Imperial Community Foundation, Imperial Community Center, Zion Lutheran Church or to the donor’s choice. Online condolences may be left at liewerfuneralhome.com LIEWER FUNERAL HOME ENTRUSTED WITH ARRANGEMENTS The family has requested private family visitation only. A memorial has been established in Joy’s memory. Online condolences may be left at liewerfuneralhome.com LIEWER FUNERAL HOME ENTRUSTED WITH ARRANGEMENTS

The family of Joy L. Smith created this Life Tributes page to make it easy to share your memories.