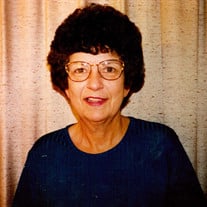 Josephine (Josie) Preston January 21, 1936 – April 11, 2017 Benkelman, NE – Josephine Preston, 81, passed away April 11, 2017, at her home in Benkelman. She was born January 21, 1936 in Atwood, KS. Josie was the youngest child born to Joseph Theodore and Fannie (Bashford) Barenberg. When she was four years old, the family moved to Dundy County, Nebraska. She attended country school District 31 for grades one through eight and spent her high school years at Benkelman High School. In 1953, she graduated with the first class in the new high school. In 1956 Josie married Air Force A/2C Jerry Preston, also of Benkelman. Her first action as a new Air Force wife was to drop her husband off at Lackland AFB, Texas to attend the USAF Pilot Training Program and return to Benkelman. It was the first of many difficult responsibilities she would incur throughout their military career. The intensity of the training and the fact that Jerry was required to live in the trainee quarters meant that they would have to live apart for the next 15 months. On April 24, 1957, Josie delivered their first child, Julia, at the Morehouse hospital in Benkelman. Jerry was still in training and couldn’t be there, but, fortunately, both her family and his filled in for him. On March 11, 1958, Jerry graduated, receiving his commission as a 2/Lt and his pilot wings and the family was united once again. For them, that was just the beginning. Following Advanced Training in Helicopters, they were assigned to Stead AFB near Reno, NV, where Jerry was selected as an instructor in the USAF Helicopter Pilot Training School. The assignment was perfect for Josie’s introduction into military life. The relatively small base was intimate as was the Helicopter Squadron; it was almost like living in their own small town. New base housing had just been completed and everyone in the squadron lived on-base. Nearly everyone was young and most had small children. Most everyone was far from home so families relied upon one another for support. Consequently, numerous life-long friendships developed that would continue throughout her life. Although she didn’t realize it, Josie had all the necessary attributes of the ideal military wife; having lost her mother at age 13, she was strong of character, self-sufficient when required, and resilient enough to adapt to whatever situation presented itself. On December 14, 1958, their second child, Jeffrey, was born and on March 22, 1961, their third child, Jason, arrived. In November 1962, Jerry was assigned to a tour in Viet Nam so he and Josie packed up their newly expanded family and moved her and the kids back to Benkelman. One year later Jerry returned. Fortunately, they had been reassigned to Stead AFB again so they returned to the Reno area to rejoin many of their old friends. In December 1969, after a couple of stateside assignments, Jerry received orders for a one-year tour in South Korea. So, once again, they packed all their stuff and moved back to Benkelman while Josie and the kids awaited the completion of that tour. In January 1971, they were assigned to their final military station at Scott AFB, IL. In 1972, they purchased the old state fish hatchery east of Benkelman which they fondly named “The Almosta Ranch.” Then in December 1973, after twenty years in the Air Force (five enlisted and fifteen as a commissioned pilot) and fourteen moves, Jerry retired as a Major and they moved back to The Almosta. They lived on The Almosta for nearly twenty-four years. To Josie, living on The Almosta was her Eden. She enjoyed her menagerie of cats, dogs, cows & calves, horses, chickens, ducks and geese. In 1997, they moved to Benkelman for their final move, however, for the rest of her life she would treasure her years on The Almosta with the family and the animals she loved so much. Jerry had often said, “The secret to a successful military career for a family man is a strong supportive wife and understanding adaptable kids. I was blessed with both.” She was preceded in death by her parents; sister Ester Barenberg; brother Walter Barenberg; great-grandson Jerry Ramsey; parents-in-law Leon and Helen (Walsh) Preston; brothers-in-law William (Bill) Preston and Lawrence Richard; and sons-in-law Ray Belcher and Chester Reiman. Left to cherish her memory, Josie leaves her loving husband Jerry; daughter Julie Preston; son Jeff Preston and significant other, Carolyn Graham; son Jason Preston and wife Cindy (Criger) Preston; sister Adele Richard and sister-in-law, Sharon Barenberg; nine grandchildren, fourteen great-grandchildren and many nieces and nephews. Visitation is Monday, April 17, 2017, 2 pm to 6 pm at St. Joseph’s Catholic Church in Benkelman followed by Rosary services at 7 pm. Mass of Christian Burial will be Tuesday, April 18, 2017, 11 am at St. Joseph’s Catholic Church with internment following at the Benkelman Cemetery. Reception will follow at the Catholic Church. All times are MDT. Memorials have been established to the Sarah Ann Hester Home in Benkelman and to Community Healthcare and Hospice of McCook. Online condolences may be left at liewerfuneralhome.com BENKELMAN MEMORIAL CHAPEL IS ENTRUSTED WITH ARRANGEMENTS

The family of Josephine Preston created this Life Tributes page to make it easy to share your memories.