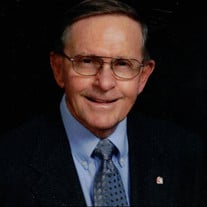 John Dutton Osler was born June 26, 1927, on his grandfather Joseph Osler’s homestead 9 miles south of Elsie, Nebraska. John passed away July 5, 2021. He had recently turned 94 years of age. His parents were Frank and Bertha Osler. John had 3 sisters (Katherine, Barbara and Dorothy) and 2 brothers (Frank and Robert) all of which preceded him in death. In 1936, he moved with his family to the place south of the Blanche Cemetery. He attended the Blanche School and later graduated from Chase County High School in 1944. John was drafted into the Army in 1945 and was discharged in 1946 with the rank of sergeant. John continued his education at the University of Nebraska and graduated with a Bachelor of Science in Agronomy. While at the university, he was a member of the Innocents Society, Corn Cobs (the crop judging team) competing in Kansas City and Chicago, Alpha Zeta, Gamma Sigma Delta and Alpha Gamma Rho Social Fraternity. John was inducted into the Nebraska Hall of Agricultural Achievement in 1972. In November of 1949 he married Joan Ruth Fredrickson in Valley, Nebraska. They set up housekeeping in Wauneta, Nebraska, where John taught a Veterans’ Ag class for 3 years. In 1953 they moved to the farm where he was born. They lived there for 28 years. They had one of the first irrigation wells in this upland location and were able to help develop certified grass seed production on a commercial basis. Five children came to live with them at this location, Susan Kay (Steve) Hanson, Scott Edward (Debra) Osler, Douglas Robert (Jody) Osler, William Frank (Gail) Osler, and Amy Joan (Clark) Hemje. In 1982, John and Joan moved to Imperial where they enjoyed activities at the Methodist Church and square dancing. John was active in Masons for over 70 years and also in Lions for many years. John had a great love of history and spent many hours working at the Chase County Museum and at the Blanche Cemetery. John and Joan resided in the Imperial Heights when Joan passed away in 2016. John has enjoyed the staff’s care and companionship at the Heights and the Manor. John especially loved spending time with his children and following the activities of his grandchildren and great-grandchildren. Survivors Include: Daughter: Susan (Steve) Hanson of Elsie, NE. Son: Scott (Debbi) Osler of Elsie, NE. Doug (Jody) Osler of North Platte, NE. Son: Bill (Gail) Osler of Aurora, CO. Daughter: Amy (Clark) Hemje of Adams, NE. 8 Grandchildren: Nick Hanson and Laura (Hanson) Barrett, Michael Osler, Chris Osler and Sally (Osler) Andersen and Victoria Osler, Amanda (Osler) Frickey and Josie Osler. 8 Great-Grandchildren: Ryleigh, Max and Bradley Hanson, Mason and Sam Barrett, Brynlee Osler, Harrison Osler and Violet Andersen. Brother-In-Law: Phil Fredrickson and wife Hedy of Seattle, WA. Funeral Services will be held Monday, July 12, 2021, 9:30 A.M. (MT) at the First United Methodist Church of Imperial with Pastor Debra Copple officiating. Inurnment will follow at the Blanche Cemetery, rural Elsie, NE. No visitation, John chose cremation. Memorials in John’s memory have been suggested to the Osler Family for a designation to the Chase County Museum or the Blanche Cemetery. On line condolences maybe left at liewerfuneralhome.com LIEWER FUNERAL HOME ENTRUSTED WITH ARRANGEMENTS

The family of John D Osler created this Life Tributes page to make it easy to share your memories.