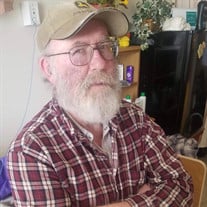 John Francis Ohrman was born April 12, 1954 to Lee and Mary Lou (Brown) Ohrman in Colby, Kansas. He had two brothers, Mike and Nick Ohrman and a sister Sherry Hanes. John attended Benkelman High School where he met Jane Sanford. They were married on September 7, 1972 at the Trinity Baptist Church in Benkelman. From that union they had two children, Johnny (Kelly) Ohrman of Colby, Kansas and Teresa (Jason) Williams of Abilene, Kansas. He is also survived by five grandchildren: Shelby (Nick) Baney, Morgan (Mitchell) Shillington, Drake Webster, Alexandria Webster and Bailey Ohrman; four great-grandchildren: Thea Baney, Jax Shillington, Janessa Webster and Nolan Baney. John was preceded in death by his parents; wife, Jane; his three boys; mother and father-in-law; brothers-in-law and his grandparents. John’s greatest achievements were being a husband, father, grand and great-grandfather. He was also extremely proud to own and operate Ohrman Repair with his Son! John also helped get the Benkelman Carnival up and running. He went and picked up rides, set them up and maintained them all year long. John put in countless hours preparing the rides every spring for the upcoming carnival season. He placed his heart and soul in the success of the home-owned carnival. John enjoyed collecting Coca-Cola and Mickey Mouse items, making horseshoe crafts, spending time with his grandkids and great-grandkids. You could always find him out in his garage tinkering with his projects. John worked most of his life for his father driving a truck and working in the shop. When he was not driving truck he worked for Larry Tenbensel on his farm/ranch. He also farmed for John Kern, owned and operated Ohrman Repair and worked for the Dundy County Roads Department. John passed away Wednesday, May 15, 2019 at his home in Benkelman. He was 65 years of age. John was an amazing husband, father, son, grandfather and friend to so many. He held all his friends and family close to his heart! A celebration of life service will be held for John and Jane on September 7, 2019; 10:00 A.M. (MT) at Trinity Baptist Church in Benkelman. Please come and celebrate their lives, their love and their anniversary. No viewing, John chose cremation. A memorial has been established to the Dundy County Fair Carnival Fund. Online condolences may be left at liewerfuneralhome.com BENKELMAN MEMORIAL CHAPEL IS ENTRUSTED WITH ARRANGEMENTS

The family of John Ohrman created this Life Tributes page to make it easy to share your memories.