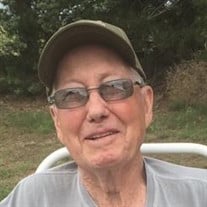 John Edward Monasmith was born January 2, 1936, at Haxtun, Colorado, to Marion and Ruth (Pribbeno) Monasmith. As a young man, John grew up and attended school in the Lamar and Champion, Nebraska, area. He graduated from Chase County High School, Imperial, in 1955. John began working in the oil fields after graduation and was drafted into the U.S. Army in 1959. He was discharged, 1961, and returned to Southwest Nebraska, to begin his long life career as a semi-tractor owner operator. In the early 1980’s, John drove his truck to Alaska, where he resided for several years. He traveled the haul road from Fairbanks to Prudhoe Bay in the days before it was known as the “Ice Road” on the History Channel television show. He returned to Nebraska and resided in Wauneta for many years. He recently had moved to Arapahoe, Nebraska, because of his health and to be near his Sister, Fern. John enjoyed drinking coffee and visiting with friends and relatives. He loved to watch and follow Nebraska Football and the Colorado Rockies, and was an avid raccoon hunter in his early days. He was a former member of the Wauneta Volunteer Fire Department. He was also a member of the Wauneta American Legion Post # 304, and the Wauneta VFW Post #4688. John passed away Thursday morning, July 26th, 2018, at the Good Samaritan Care Center in Arapahoe, Nebraska. He was 82 years of age. John was preceded in death by his parents, Marion and Ruth, brother; Don Monasmith, and brother-In-law; Dean McCoy Survivors Include: Daughter: Callene Monasmith and wife, Mo Haddock, of Anchorage, AK Son: Mike Monasmith of Sacramento, CA Son: Matt Monasmith and wife, Kimberly, of Ada, OK Son: Mark Monasmith and wife, Marcella, of Salt Lake City, UT Grandson: Sawyer Monasmith, of Salt Lake City, UT Sister: Joan Mathews and Husband Boyd, of Imperial, NE Sister: Fern McCoy of Arapahoe, NE Sister-In-Law: Amy Monasmith of Imperial, NE Funeral Services for John Monasmith will be held Wednesday morning, August 1s t2018 11:00 AM (Mountain Time) at the Redeemer Lutheran Church of Wauneta, with Pastor David McCarthy officiating. Visitation will be held Tuesday afternoon, July 31, 2018, 2:00 P.M. – 6:00 P.M. (Mountain Time) at the Funeral Home in Wauneta. Graveside inurnment services for John Monasmith will be held Saturday morning, August 25th, 2018, 11:00 AM (Mountain Time) including full military honors, at the Green Lawn Cemetery, Lamar, Nebraska, with Pastor David McCarthy officiating. Memorials have been suggested to the Wauneta Volunteer Fire Department and the American Legion Post #304 of Wauneta. Online condolences maybe left at liewerfuneralhome.com LIEWER FUNERAL HOME OF WAUNETA IN CHARGE OF ARRANGEMENTS

John Edward Monasmith was born January 2, 1936, at Haxtun, Colorado, to Marion and Ruth (Pribbeno) Monasmith. As a young man, John grew up and attended school in the Lamar and Champion, Nebraska, area. He graduated from Chase County High School,... View Obituary & Service Information

The family of John Monasmith created this Life Tributes page to make it easy to share your memories.