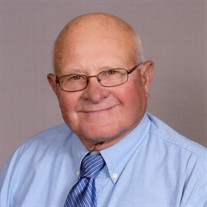 John H. McDonald, 76; died September. 8, 2018, at Dundy County Hospital in Benkelman, Nebraska. John was born December 9, 1941, to Lyle and Flora (Lenhart) McDonald in Benkelman, NE. While growing up in Dundy County, John graduated from Benkelman High School in 1960. John graduated from Chadron State College, in Chadron, NE in 1965 with a Bachelor of Science degree. During the same year, he married Margaret M. McChesney, on June 17, 1965 in Alliance, NE. The couple lived in Lovell, Wyoming and St. Francis, Kansas, before moving to Benkelman, NE to spend the rest of their lives together. While employed as a Teacher of English and Speech for 37 years, John received his Master’s degree in Education from Kearney State College in Kearney, NE, in 1987. His love and passion for teaching impacted generations of students from the Benkelman/Dundy County Schools. His teaching approach, firm with humor, elicited many fond stories! His teaching methods included incorporating speech classes and vocabulary tests into Speech teams, Mock trials, and One Act Plays to inspire students to “think” and voice their own opinions. As an educator, he was a member of the Benkelman Education Association, NSEA, and NEA. He was a respected colleague, who often mentored new teachers. During his teaching tenure, and after, John enjoyed cultivating his childhood farm: “McDonald Farms”. He explored all that one’s own land had to offer: Breeding pigs, cattle operations, as well as small scale farming with various crops. Working & overseeing the farm operations was a true-life joy for John. He thrived in nature, with the animals and the land, evident by his pursuit of expanding his land ownership. He also held closely the relationships this endeavor fostered. Being civic minded, John also contributed to the community. He was past President of the Dundy County Hospital Board. In addition, he served on the City Council, including responsibilities as Mayor. Regarding hobbies, John had many. His first and foremost love was football. John enjoyed many years watching his beloved team, the Nebraska Cornhuskers. In addition, one of his main hobbies in retirement was collecting toy tractors and semi-trucks. Margaret and John spent many enjoyable days going to toy farm sales, semi-truck sales and displays. John was preceded in death by his parents, Lyle and Flora(Lenhart) McDonald, and sister Sandra Antholz of McDonald KS. He is survived by his wife of 53 years, Margaret; son Shawn and wife Myrth of Silverthorne, CO, daughter Dana McDonald and husband Dylan Beffel of Ham Lake Minnesota; six grand-children, Isabella McDonald, Aurora Beffel, Marketta Beffel, John McDonald, Jay McDonald, and Lyle McDonald. Also surviving are his brother Bob McDonald (Janet) McDonald of Fort Collins, CO and brother-in-law, C.W. Antholz of McDonald, KS.; brother and sisters-in-law, Bob(Julie) McChesney of North Platte, NE and Mary (George) Toline of Wahoo, NE. Mass of the Christian Burial will be held Thursday, September 27, 2018, 10:00am. Rev. Matthew Eickhoff will be officiating at St. Joseph’s Catholic Church in Benkelman, NE. Inurnment will follow at the Benkelman Cemetery. No visitation, cremation was chosen. Memorials have been suggested to Dundy County Hospital Foundation in lieu of flowers. P.O. Box 85 Benkelman, NE 69021 (That Man Is a Success) Who has lived well, laughed often and loved much; who has gained the respect of intelligent women and men and the love of children; who never lacks appreciation of the earth’s beauty or fails to express it; who follows his dreams and pursues excellence in each task; and who brings out the best in others, and gives only the best of himself. (Author Unknown) BENKELMAN MEMORIAL CHAPEL ENTRUSTED WITH ARRANGEMENTS

The family of John H. McDonald created this Life Tributes page to make it easy to share your memories.