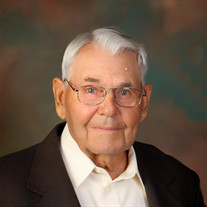 JOHN FERGUSON John Melvin Ferguson was born to John Henry and LuNetta Mae (Bales) Ferguson October 20, 1922 near Haddam, Kansas. He left his earthly home and was received by his Heavenly Father on March 26, 2017, in Imperial, Nebraska. . The family moved to Southwest Nebraska, north of Parks, when John was a few months old. The family left Haddam, Kansas, in a covered wagon and when baby John became ill his Uncle Oscar and older brother Ora met the family to help them finish the journey. John’s father and older brother Ora, brought the cattle and other things on the train while his Uncle Oscar brought him and his other 5 siblings and mother by car. John spent his next 90 years living on that same farm. Johnnie and his younger brother, Willis enjoyed spending a lot of time together in their younger years. They hunted and trapped skunks, coyotes and other animals with their dogs, sometimes while riding their horses. They had lots of stories to tell of their experiences. His first year of school was at the Rollwitz School which was located northwest of their farm. The next seven years of school was spent at District #37 which was located near the Carl Lutz farm, about four miles from where they lived. He and his siblings rode their horses or took the horse and wagon to the school. As a young adult he continued to farm the Ferguson home place, but also was able to experience summer haying in Walden, Colorado. John and his siblings began attending Group Gatherings that were held in the Rollwitz church and other area churches. It was during this time that he made the commitment to make Jesus Christ his Lord and Savior. It was here that many friendships were made that became lifelong friendships. He shared of the many gatherings with his friends Edgar Graham, Arikilee West, Clifford Day and many others. It was during one of these gatherings at a school southwest of Haigler that he met Wilma Wioma DeGarmo. They were married August 20, 1948 at the Pilgrim Holiness Church in Haigler, Nebraska. Wilma joined him on the farm and shortly thereafter they were joined by Mervin Wayne, and Wilma Jean. Mark John came later and they became a farming family for the rest of their lives. John and Wilma were some of the pioneers of irrigation in Dundy county. It was with great pride that Wilma helped Johnnie move irrigation pipe by hand until the corn was too high for her to carry it over. They would take Wayne and Jean, as young children, along to the fields when it was time to change the sprinklers. They advanced on to the irrigation pipe on Skids and Wheels and eventually to the automated pivot sprinklers today. They also worked together in the fields, whether it be cutting silage, picking corn or in the hay fields. His love for cattle brought the start of 48 Angus Ranch and they began selling registered angus cattle. John and Wilma have lots of memories of the Nebraska Angus bus tours and seeing other ranches with Angus cattle. Uncle Johnnie's farm was the highlight of every nephew and niece! Several nephews spent many summers helping him on the farm, making lots of memories. As the family grew and grandchildren came along...he shared his farming knowledge with them and loved to do things together. He especially loved to go look at the crops and cattle with them. John was a respected man of the community serving in many ways. He served on the school board for District #37 and Benkelman School along with several local church boards. Church was always important to him and he gave many hours helping in what areas he could. It might be picking up some neighbor children and taking them to church with the family or teaching youth classes. Later in years he was faithful in attending and supporting the Imperial Valley Holiness Camp. The Imperial Manor chapel services became their church home after retiring to the Imperial Heights. He always regretted that he never got to serve his country in the military, but he served it diligently on the farm. He was preceded in death by his parents, brothers, Ora, Alvin, Willis and Sisters Esther Hobbs, Dorothy Burks, Edna Criger, Evea Karns, and Leitha Christensen, grandson Nathan Ferguson and several nieces and nephews. Those left to treasure his legacy are his wife, Wilma; Sons, Wayne (Marlyn), Mark (Julie) and daughter Jean (Robert) Beck along with grandchildren Carla (Josh) Taylor, Derek (Carla) Beck, Matthew (Kelly) Beck, Emma and Tristan Ferguson and 10 great grandchildren, along with a host of Nephews and nieces and many lifelong friends. Funeral services will be held Friday afternoon, March 31, 2017, 2:00 P.M. (Mountain Time) at the United Methodist Church of Benkelman with Rev. Lloyd Bley officiating. Interment will follow at the Benkelman Cemetery, Benkelman, NE. Visitation will be held Thursday afternoon, March 30th, 2017, 2:00 P.M. – 6:00 P.M. (Mountain Time) at Liewer Funeral Home in Imperial. A memorial has been established in John’s memory. Online condolences maybe left at liewerfuneralhome.com LIEWER FUNERAL HOME ENTRUSTED WITH ARRANGEME

JOHN FERGUSON John Melvin Ferguson was born to John Henry and LuNetta Mae (Bales) Ferguson October 20, 1922 near Haddam, Kansas. He left his earthly home and was received by his Heavenly Father on March 26, 2017, in Imperial, Nebraska.... View Obituary & Service Information

The family of John M. Ferguson created this Life Tributes page to make it easy to share your memories.