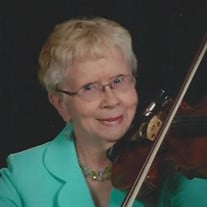 Joan Osler Joan Ruth Fredrickson Osler was born January 20, 1930 in Omaha, Nebraska to Edward and Ruth Waterhouse Fredrickson. She grew up in Valley, Nebraska and graduated from high school there in 1947. While attending the University of Nebraska on a Regent’s Scholarship studying music, Joan met John Osler. They were married on November 27, 1949 in Valley, and moved to Wauneta to make their first home. To this union, five children were born: Susan, Scott, Doug, Bill and Amy. Two years later they moved with their twins to the farm in rural Elsie, NE. They made their home and raised their family there for thirty years, then moved to Imperial in 1982, where they chose to live in their retirement years. They were blessed to be happily married for 66 years when she peacefully passed away on August 21, 2016, surrounded by her family. Joan enjoyed a very happy, fulfilling life as a devoted wife, mother and grandmother. She faithfully attended as many activities of her children, grandchildren and greatgrandchildren as possible and always had a wonderful meal waiting for her family. After moving to Imperial, she worked for 15 years at the Chase County Community Hospital in the admissions department, scheduling and welcoming patients to the many outpatient clinics. Joan was a faithful servant of God and was a member of the First United Methodist Church of Imperial. She was a member of PEO, Eastern Star, UMW, Chase County Stompers Square Dance Club, and played in the Sandhills Symphony in North Platte for 25 years. Her first love was music and spent many hours playing her violin. Joan played her violin at many events over the years, but some of the most fun she had was with her gospel band and string quartet friends. Other interests were gardening her flowers, quilting, knitting, reading and playing cards. When not involved with these activities, she loved to travel with John, the trip to the Holy Land being one of her favorites. Her parents and her sister, Jean, preceded Joan in death. She is survived by her loving husband, John, her daughters, Susan (Steve) Hanson of Elsie, and Amy (Clark) Hemje of Adams, her sons, Scott (Debbi) of Elsie, Doug (Jody) of North Platte, and Bill (Gail) of Aurora, CO. She is also survived by her brother, Phil (Hedy) Fredrickson of Seattle, WA. Joan was blessed with eight grandchildren, Nick Hanson, Mike Osler, Laura (Hanson) Barrett, Chris Osler, Sally (Osler) Andersen, Tori Osler, Amanda Osler, and Josie Osler, and seven great-grandchildren. Memorial services for Joan Osler will be Thursday morning, August 25, 2016, 10:00 A.M. (MDT) at the First United Methodist Church of Imperial with Pastor Dirk Weiss officiating. Interment will follow at Blanche Cemetery in Rural Elsie, Nebraska. No visitation; cremation was chosen. A memorial has been established to the Rainbow Promise Preschool in Imperial, Nebraska. Online condolences can be left at liewerfuneralhome.com LIEWER FUNERAL HOME IS ENTRUSTED WITH ARRANGEMENTS

Joan Osler Joan Ruth Fredrickson Osler was born January 20, 1930 in Omaha, Nebraska to Edward and Ruth Waterhouse Fredrickson. She grew up in Valley, Nebraska and graduated from high school there in 1947. While attending the University of Nebraska... View Obituary & Service Information

The family of Joan Ruth Osler created this Life Tributes page to make it easy to share your memories.