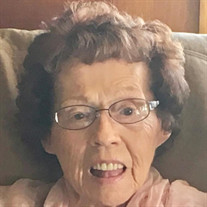 Joan Thompson Kitt was born September 27, 1932, to Aaron and Fae (Conrad) Thompson in Council Bluffs, Iowa, the sixth of seven children. As an infant, Joan was hospitalized with double pneumonia and her parents were warned she was unlikely to survive. Survive she did, however, going on to live a vibrant life well into her 80’s. Joan passed from this life on July 25, 2021, at the age of 88. When Joan was 8 years old, her father died leaving her mother the challenge of raising the large family alone during the Great Depression and WWII years. In 1951 her mother married Duncan Cloud “D.C.” Harvey of Wauneta. When her mother moved west, Joan had remained in Iowa where she lived with her older sisters and attended high school. After completing cosmetology school, a teen-aged Joan moved to Wauneta where she had her own beauty shop. In Wauneta she met the love of her life, Ervin Kitt, an established farmer and rancher from Wauneta’s South Divide. They were married on March 23, 1952. They lived the first year of their marriage in Wauneta while their modern brick house was built on their South Divide farm where they lived from 1953-1989. There they raised their three children: Candy Jo, Denise Fae and Keenan Ervin. Joan was a dedicated homemaker, known for her cooking, baking, picture-perfect housekeeping and flair for fashion. She was a member of the rural Mt. Zion Methodist Church where she assisted with Bible School and Sunday School. Mt. Zion later merged with Wauneta UMC where Joan was also a devoted member. Even though she was a city girl, Joan loved farm life, growing a big garden to can and raising chickens. She looked forward to the family vacations they took every year after wheat harvest was finished as well as family time at Enders Lake and Lake McConaughy – especially boating and water skiing. After their family was raised, Joan and Ervin enjoyed extensive travels, making trips all across the continental United States as well as Hawaii, the Caribbean and Europe. Joan especially cherished her role as grandmother and great-grandmother. She always made sure she had a well-stocked cookie jar! In 1989 they moved to a new home they had built along Old Highway 6 north of Wauneta where they could live overlooking their canyon pastures and enjoyed neighboring with their close friends Bob and Berneice Fanning. They enjoyed living along paved roads in their retirement years and made decades of cherished memories at their new home until Ervin’s health began to decline. Ervin died in 2009 at the age of 91. Joan determinedly remained in her rural home for the next 12 years, enjoying the stunning views and battling the deer to keep her trees and flowers thriving. Joan remained active and vital until her health began to decline earlier this year. Joan was preceded in death by her husband, Ervin; her parents, Aaron and Fae Thompson; her father and mother-in-law, John J. and Mary Kitt; stepfather, D.C. Harvey; sisters Sunshine Pogge, Ramona Cackler, Gloria June Skiles and Patricia Kitt; and brothers, Conrad “Buddy” Thompson and Ronald Thompson. Joan was happiest when surrounded by her family and is survived by her children: Candy (Tom) Henning of Lincoln, NE; Denise (Kevin) Janicek of Wauneta, NE; and Keenan (Tina) Kitt of Wauneta, NE. Grandchildren: Kyle (Emma) Kitt of Fort Collins, CO; Mandi (Beau) Kramer of Wauneta, NE; Ashley (David) Spahn of Haigler, NE; Cassie (Taylor) Kohl of Omaha, NE; Maddie (Anthony) Giamello of Dallas, TX; and John Kitt (Amanda Shrout) of McCook, NE. 8 Great-grandchildren: Marlee and Brooks Kramer; Will, Callaway and Thomas Kohl; Gabrielle and Abraham Spahn; and Baby Giamello arriving soon. Stepsisters: Lorraine Einspahr and Elaine Condron. Many dear nieces, nephews, cousins and friends. Funeral services for Joan will be held Monday, August 2, 2021, 9:30 a.m. (MT), at the First United Methodist Church of Wauneta with Rev. Elias Mukindia officiating and guest officiant Pastor Gary Hunt. Interment will follow at Riverside Cemetery, rural Wauneta, NE. Visitation will be held on Sunday, August 1, 2021, 4:00-6:00 p.m. (MT), at Liewer Funeral Home in Wauneta, NE. A memorial has been established in Joan’s memory to the Wauneta United Methodist Church. On line condolences may be left at liewerfuneralhome.com LIEWER FUNERAL HOME OF WAUNETA ENTRUSTED WITH ARRANGEMENTS

Joan Thompson Kitt was born September 27, 1932, to Aaron and Fae (Conrad) Thompson in Council Bluffs, Iowa, the sixth of seven children. As an infant, Joan was hospitalized with double pneumonia and her parents were warned she was unlikely... View Obituary & Service Information

The family of Joan Kitt created this Life Tributes page to make it easy to share your memories.